I hate going to the mall during the holidays. I usually avoid it at all costs. I'm one of those folks who embraced online shopping in it's early days and bought more and more Christmas gifts that way until I finally reached the 100% online level a couple years ago. Until this year. Leave it to my mother to come up with the one gift that absolutely could NOT be found online.

A few years ago my mom fell in love with the Crabtree & Evelyn signature series of china. It's Mason's Ironstone and made in England. Pretty stuff (and expensive), but they discontinued it this year. There were NO retailers online who had any in stock, including the C&E website. I couldn't cave and get mom's second choice gift - a Coach umbrella. $138 for an UMBRELLA? No frackin way. So I started making phone calls. I lucked out and found a local Crabtree & Evelyn that still had some of the china in stock.

The only problem...the shop is located in The Mall at Short Hills. Not exactly convenient and not exactly my kind of mall. Why? It's SWANKY. I'm a Walmart kind of gal. I get a little nervous when a mall has valet parking and shops like Brooks Brothers, Cartier, Dior, Dolce & Gabanna, Armani, Gucci, Saks...yadda yadda. I parked next to a pretty BMW and I did buy Tyler some sneakers in Nordstroms (and then wondered at my own sanity when she told me the cost of his new "Heelies".) Then we decided to see how the swanky mall did "Santa". 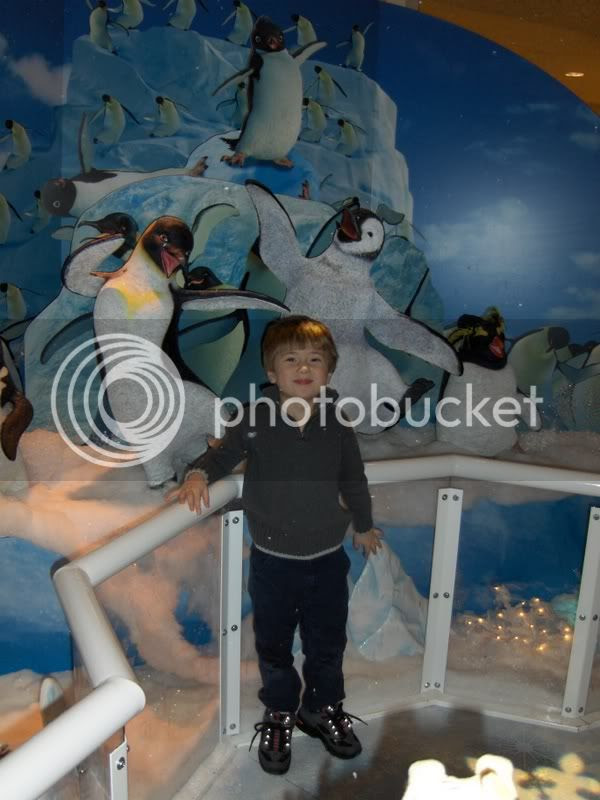 I had the boys dressed nice and was crossing my fingers that they both would last through the wait in line. They did great! Santa's area wasn't very special, but they did have fun things to look at along the path to Santa's bench. It was a Happy Feet theme with giant snowglobes full of figures from the movie. Just before we turned a corner to get our Santa photo opp, they had a super giant snow globe that you could walk through. It was even snowing inside. Pretty cool!

I was just happy that Tyler showed almost no hesitation with Santa this year. Yay!!! Poor kid has had a major Santa phobia for years now. Max was really funny. He was snoozing in his stroller up until the moment I lifted him out and handed him to Santa. Max opened his eyes, looked at Santa and got the most comical look on his face. It looked like he was thinking, "Who is this Bozo??!" He didn't smile, but he didn't cry either. I'll take it. 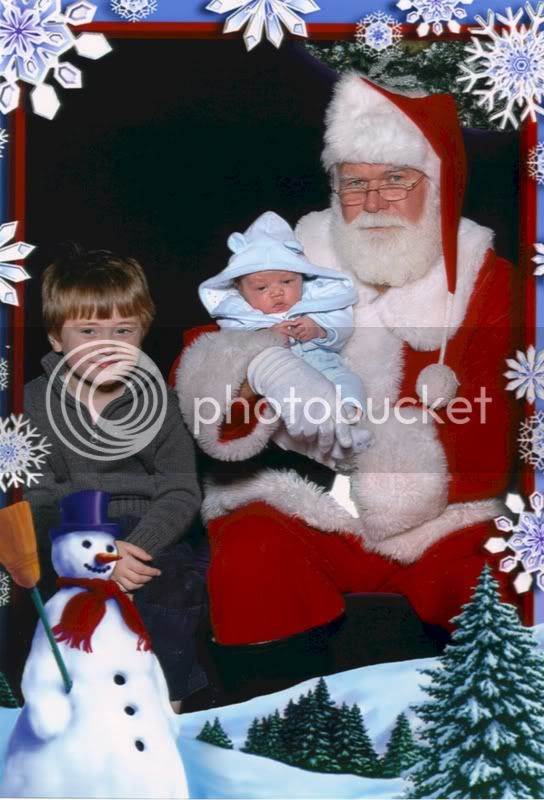 jennifer said…
YAY Tyler! He looks like such the grown up young man taking care of the little bro.

Anonymous said…
Tyler looks so cute sitting there beside Santa how adorable they both look. Thanks for sharing.

Magogo's Musings, too said…
Amazing how much Tyler has grown! The picture is great, and you are courageous indeed to go to the Mall. Maargo
2:57 PM

mygirlboutique@gmail.com said…
Wow, you went to the mall in December. Brave brave woman.
:)
1:29 AM

Anonymous said…
Wow, that Santa looks like the REAL Santa. Here in Indiana, we just have the guys with obvious fake beards and they usually smell funny. ;) The picture looks great!
12:38 AM

amy said…
Maggie's got the Santa phobia too---she usually just looks at him from a safe distance :) I can't really blame her---the one they had at the Mall last year looked like they picked him up at a hobo camp...
8:19 AM

Anonymous said…
ohhhhhh have been to the short hills mall.....I know exactly what you are talking about. we'll have to go together so we can both feel out of place, LOL super cute santa photo though...and darnit, anna wanted healies....i completely forgot....well, that is, santa forgot...yea, that will be my excuse, LOL netti
10:13 AM