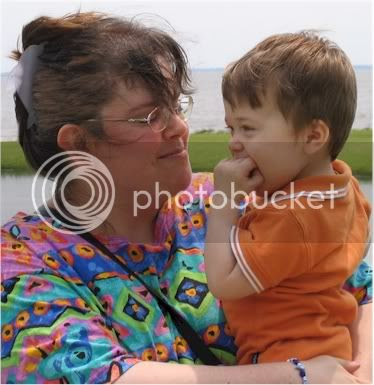 As the mother of a toddler, I spend a lot of time worrying and wondering about the various influences in my son's daily life. TV is a big part of that. So is music. I could talk about the recent study that linked early childhood television watching to the development of ADD (BabyCenter News - Archive). But I really want to keep thinking it's a load of bunk.

I was raised on TV (to my mother's endless exasperation). So was my brother. He was exposed at a much earlier age than I was and he DID develop ADD...so it's hard for me to argue against that study. I didn't develop ADD, but I do wonder if I have an adult form of ADHD since I seem to have so much trouble getting anything accomplished each day and I am easily distracted. Maybe that is just a side-effect of sleep deprivation and mothering. (Uh oh, I got off on a tangent again, didn't I.)

No hateful emails or comments please, but the TV goes on here first thing in the morning and stays on pretty much all day. During the day the TV is on Noggin (100% commercial free toddler programming, for those that are unfamiliar N O G G I N) for the most part. All my adult life, if I was at home the TV was on. It has been impossible to break that habit. But at least I am aware and careful about the types of programming my son watches. But this study has me worried. If ANY kind of TV exposure leads to an increased risk of developing ADD, I should turn the idiot box off, right? So why can't I do it?

I will leave the TV on even during the most insipid of shows (such as the show I am being assaulted with now - the Tweenies). When I can't stand it another minute, I will switch to PBS (eeeeek Barney, Teletubbies and Boo Bah!) Or I will switch to Nick Jr. (eeeeek Rubba Dubbers!) There are lots of choices. Can they all be evil? Funny thing is, Tyler has his own tastes. It's very clear which shows he likes and which he is indifferent to. I should probably cut back and only turn the on the TV when there is a show on he wants to see. But how to fill the silent void that fills the house once the TV turns off...
Email Post