This is a hard topic for me. We moved so often when I was a kid and I have a looooong memory (yes I do, indeed, remember each and every friend I have ever had). I've lost touch with pretty much all my friends prior to college. My best friend when I was a fun-loving toddler/preschooler living in Okinawa, Japan was Todd. He was a few months younger than me but since we were the ONLY American/English speaking kids in the neighborhood, we had very little room to be choosy. He liked to come over and use my swing set, eat bologna straight from the fridge, and my mother's Kraft mac 'n cheese. His last name is lost to history (and my mother's addled brain). Then my Dad was transferred stateside to NM. Bye-bye Todd.

My best friend in kindergarten at Immaculate Heart of Mary school in Las Cruses, NM was Maria. We lasted through part of first grade but I went on a sleep-over to her house and we almost burned her bedroom up playing with matches under her bed (the carpet was good and scorched by the time her mom found us and forbid me to come over ever again). Bye-bye Maria.
I was content then to play with the little boy, Taj, from across the street and his bossy sister, Tara. (He was my first experience playing "doctor" with a boy. Shhh!) Then we moved to FL. Bye-bye Taj.

Second grade was a bit of a blur. We were living in Florida and all I can remember was the excitement of riding on a school bus for the first time ever. The summer before third grade found me in yet another new state - Dad was transferred to MA. My first friend was my next door neighbor, Jane G. We had a falling out when Pam L. moved into the next house down. She was from California and seemed more exciting than Jane. Then we were ALL friends and now included Sarah & Laura C. from down the street. My new posse and I all took the bus together to Nathanial Page School in Bedford, MA where I befriended a couple more girls, Becky E. and Barb K. Becky and Barb were tight, but seemed interested in the newcomers (me and Pam). Pam moved away before the start of fourth grade, and since I saw more of the other girls on my own street during that summer, I seemed to lose ground with Becky and Barb. They ended up becoming to me as Lex Luthor is to Superman. My arch-nemeses. I'll have to post about them at length another time. Ah the scars of childhood. Bye-Bye Pam L.

Jane, Sarah/Laura (they were like a sister unit, never one without the other), and I had on again/off again friendships until sixth grade...sometimes all of us got on well, sometimes just me and Jane, sometimes just me and the sisters, and often it was just me against them. I spent sixth grade pretty much friendless except for this girl I had met in 4th grade at CCD class (Sunday school) who I occasionally saw. She lived on Hanscom AFB and since we lived off-base, I only got to see her on hot days at the base pool or when I could con my Mom into giving me a ride. Seventh grade saw me at yet another new school - John Glenn Jr. High. Jane's family had moved to NH and Sarah/Laura went to live with relatives in England to finish out their education. Bye-Bye Jane, Sarah & Laura.

I was still at war with Becky/Barb. So I sat alone on the school bus each day until part way through the year when Jean arrived. She was a child of divorce and had been living with her Dad, but he had a new woman and foisted Jean off on her Mom (who was living with a boyfriend as his home at the time). Ugly scene. Her Mom and the boyfriend were drunks and her older brothers were druggy dropouts. But Jean was the nicest person I had ever met yet. She had a club foot, wore special shoes and was instantly a target (like I had become). We bonded. Two peas in a pod...until I made the mistake of telling my Mom about the older brother who grew marijuana under plant lights in his closet and the fact that Jean's Mom wasn't married to the man they were living with. It all seemed too sordid for her taste and I was promptly forbidden to go to Jean's house anymore. I snuck over there every chance I got, but eventually Jean's Dad realized the error of his ways and took her back to live with him. Bye-bye Jean.

Then there was Valerie B. We were in the orchestra together. Second violins. Through her I met several other music and theater geeks and I had a new posse for eighth grade. I'd had enough of the constant mental torture inflicted by my peers to know I didn't want to go to the public high school that next year. So bye-bye everyone!

I passed the entrance exam and was admitted to Arlington Catholic High School. What a relief. A brand new start! As freshman year progressed I lost touch with Valerie and the old posse. They moved on. I soon met my all time best friend EVER to date whilst taking public transportation to and from high school. My father had since retired from the military and I was resigned to a fate of living the rest of my school days in Massachusetts (oh the horror). Kathleen sat next to me on the "T" one day, plop, as if by magic. We started talking and didn't stop until I lost her at much too young an age years later (see my very first journal post). Bye-bye Kath.

When high school started, my "base" friend, Pam C. had moved to upstate NY. We kept in touch all along through letters and since she lived close to some of my relatives, I got to see her now and then too. Of all my childhood friends, she is the ONLY one I am still in contact with to this day. So just for sheer persistence and not losing touch with me after all those years, she kinda became my current defacto best friend. We don't have much in common. She lives far away in western VA. We see each other, at most, once a year and often lose touch for months (and once, YEARS) at a time. But we always reconnect via phone and chat for hours as though no time has passed. Our only commonality is our shared military brat experience and the fact that we met way back when. So, for having the unique distinction of being my oldest living friend...here, in a place of honor in my journal, is my best friend from forth grade (and still my friend to this day): 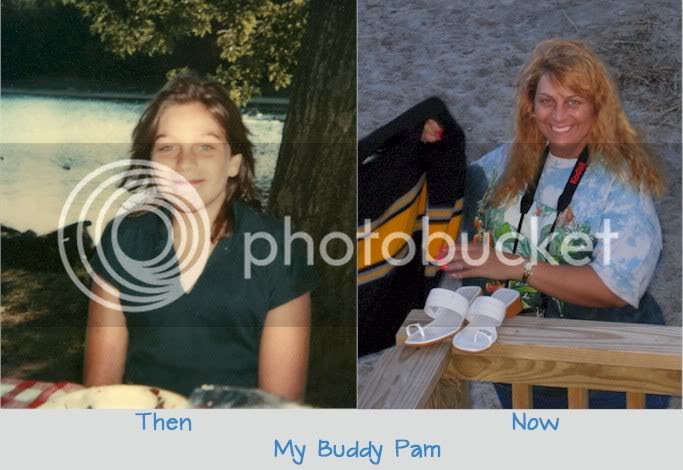