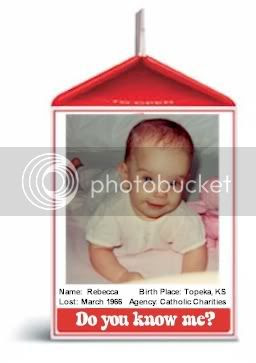 My brother and I were both adopted as infants. I was adopted at 3 weeks old back in 1966 in Topeka, KS. I often wonder where I was for the first 3 weeks of my life. Was I with my birthmother while she tried to work out some way of keeping me? Or she figured out in that timeframe that being a mother was not for her? Or perhaps I was just placed in foster care until arrangements could be made with an adoptive family. My adoptive Mom (henceforth to be referred to as just Mom) has no idea. The agency didn't give them those details, or so she says. The agency really didn't provide them with much detail AT ALL. I have almost no health history (just a sketchy comment from the social worker that there was a case of diabetes in the "family history".) My mother always told me they were given almost no biographical data on my birthmother and nothing whatsoever on my birthfather. All I was told was she was a "student", age 19 or 20, 5'7" and brown hair. That was it. Not a lot to go on.

I am afraid I fit the stereotype you often hear about in an adoptee...low self-esteem, lack of self-identity, troubled teen, feelings of self-loathing, being misunderstood and wondering where you "fit in" in the world, yadda yadda yadda. Much of that was written off as typical teen angst by my parents, but I know there was more to it. I always suspected that my parents knew more about my birthmother than they were telling. It was never exactly a secret when I was growing up that I was adopted. They were always forthright about that to me. But when I would tell my friends or other outsiders that I was adopted, my mother would act like I had done something wrong. See, it was OK that *I* knew I was adopted...it was NOT OK if anyone ELSE knew it. My mother was so obsessed with having children back in the day that she would rather people assumed that my brother and I were "hers" in every way. Don't get me wrong, my parents did a pretty good job of making me feel "wanted" and not like I was second best or something. The only person in our family that made me feel second best...or even not a "real" family member was my Father's Mother. She was a harsh woman and always favored her "real" grandchildren over us. Like "blood" is so gosh darned important anyway...honestly.

I found out a couple years ago that my parents were keeping a secret. They had in their possession an envelope that had been handed to them at the time they picked me up at the agency. It contained a single copy of the court surrender, but they didn't know that at the time. My birth-mother's name and address was blacked out...but what WASN'T blacked out spoke volumes to me. "Baby Girl Dorland" was peppered throughout the text of this legal document. That was ME! My mother apologized when she finally shared it with me. She hadn't opened the envelope for years after I was born. She was afraid of what was inside...maybe a letter from my birthmother or pictures or who knows what. All she knew is she didn't want to even THINK about this other woman. I was HER baby now and this other woman no longer mattered. She had been through too much heartache and now that she had her baby girl, she wanted to push all the ugliness of infertility behind her. Curiosity overcame her at one point when we moved and they changed safety deposit boxes. She had that envelope back in her hands after so many years of not thinking about it. She opened it, saw what it was, read it once, and put it back in the safety deposit box...angry that she had even looked. Now my birthmother had a name. That made her "real". She and my father made the decision not to tell me this new information so as not to "confuse" me. Of course they were lying to themselves. They just didn't want any new uncomfortable questions coming from me. Nor did they want to give me any clue to my background for fear that it would make me want to go looking for this woman someday.

My Mom asked many many times over the years, "Do you think about her? Does it make you sad? You don't ever want to go looking for her...do you?" I always said no to all of those questions, because I knew they didn't want to know the truth. I knew that me reuniting with my birthmother was one of my Mom's deepest fears. I really don't know why. I honestly think she feared she would be replaced. That I would like this virtual stranger more than her. Crazy, no? So I waited...as a teen I had a deep ache inside, "who am I? where do I come from? is there anyone else in this world that looks like me? why did my mother give me up? what is her life like now? does she ever think of me?" I wanted desperately to know but I couldn't let my parents know how I felt. I didn't want to make them angry or make them feel bad. So I waited...finally I was out living on my own. I thought NOW I can look. I have the freedom, privacy and time. But I hesitated. I finally had a long talk with my mother one day because I realized that even though I COULD go looking and they would never be the wiser, I felt I couldn't proceed unless I had her blessing. It meant too much to the both of us for entirely different reasons. She cried and asked why it was so important to me. I did my best to explain but only made things worse. She wondered why they weren't "enough" for me. Why I was being so "ungrateful". I finally convinced her that I had no intention of having a mother/daughter relationship with this woman. The best I hoped for was friendship...the worst, just one conversation to ask my questions and then never speak again. This was when she confessed her little secret about the document in the safe deposit box. It took her two more years to finally retrieve and give it too me. I would remind her about every six months. I didn't want to seem too eager.

During the time I had moved out, screwed up the courage to speak to Mom about my search, and then finally had that document in my hands a long time had passed. I was married and trying to have a child of my own. Another of my deepest desires was having children so I would finally have that sense of connectedness that was always lacking. I would at last look a my own child and see "me" reflected back. I could pass on my best traits...my musical ability, my artistic nature, my gift of imagination and writing. People would know "so THAT is where he/she gets it from..." My adoptive parents have no musical ability, are not artistic in any fashion and are lacking in spontaneity, creativity and imagination in a most glaring way. I always felt so out of place in my family. My mother would call me "odd ball", "non-conformist", and "weird". Now I could have that sense of "belonging" I always craved with my own children. But in the cruelest of ironies, I found out I was unable to give birth myself. My own hopes and dreams were dashed to pieces. We struggled for years with my infertility issues. My search almost ended just as it was begun. I did just enough research to realize that I could have requested a copy of my uncensored adoption records from the time I turned 18, according to Kansas law. I even knew which form to fill out and how much the filing fee was. All of that was placed on the back burner as I started researching modern adoption options for US. Domestic vs. International...Domestic semi-open, open, or closed...International from which country? All while going through painful rounds of IVF in a last ditch effort to conceive.

Now my son is two years old and I am again ready to turn my thoughts back to my search. But where to begin. I guess I will start by requesting a copy of my records. A person's address in 1966 may not give me much to go on. I already did a directory listing for Dorland's in the Topeka area...but who knows if any of them will turn out to be family. Or even if my birthmother told anyone of her predicament. I have never been comfortable calling strangers, so just imagine how THIS phone call would go. "Hi, my name is Becky. Do you know of any member of your family who may have given a baby up for adoption in Topeka in March of 1966?" Yikes. I need to befriend someone VERY bold who would enjoy making calls like that for me, I think. LOL I guess I will go find those internet links for the State of Kansas vital statistics office and send in my form. I'll keep my journal readers posted on my progress. I hope things will get very interesting from this point forward.
Email Post

C said…
Wow. Your little comments on my blog has led me to a long Saturday morning, pouring through YOUR posts.

I'm not sure if I'll find an update on your search for your bio mom. Just wanted to share my little story.

Both my father and FIL are adopted. My dad found his bio father just past his 50th birthday. My FIL wants nothing to do with his bio parents. His reasoning? How it would make his parents feel. They're both gone now, but he feels like it would be such a betrayal to them.

So, one of OUR children is adopted, and we are in a fully open adoption with her birth parents. We've learned so much in the last several years about the damage of closed adoptions. Even when a birth parent is in a really bad place, the child still needs that information. It gives them answers. Sadly, a lot of adoptive parents, for decades, don't see the value in those answers.

It's hard to be an adoptive parent. You can't help but be a little jealous that someone else was able to carry them in their body - bring them life. You have to force yourself to be unselfish for your child. However, your story just reminds me of why we have the type of adoption we do. I have no fears that my daughter will run away to her birth mom one day. Mom is Mom. Dad is Dad. However, birth family is still an important connection. You can't be afraid of it.

I'll keep digging through your posts.