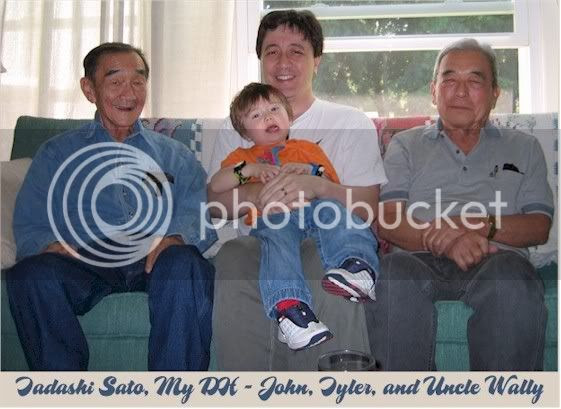 Tyler had his very first brush with fame today. Let me tell you a little background info first. My father-in-law was raised in Hawaii, growing up on the island of Maui. His best friend, growing up, was his cousin Wally - they were the same age and went to the same schools up until college. Fresh out of the Army in WWII, Haruo (My FIL) completed his college education and settled in NYC in a tiny apartment on 110th street. It was the early 1950s. In the same building was another island boy - a fellow by the name of Tadashi Sato. He also lived in a tiny apartment with his wife and daughter one floor up. Haru and Sato became friendly. Somewhere along the way Tadashi moved his family back to Hawaii where he was good friends with cousin Wally. This part of the story is sketchy to me...but I'd like to think that Haru told Tadashi to lookup his cousin when he got back to the islands. Hard to say. Those island boys all seemed to know each other. Maui is a small island. Heck, Haru's mother (My DH's Great-Grandmother) was the island midwife - everyone knew her and she delivered most of the babies on Maui back in the day. Wally spent some time living in NYC also, after the war. Fast forward 40 years...

We were invited to spend the day at my Mother-in-Law's house today, company was coming over! Turns out after 40 years, Wally and Tadashi decided to visit their old stomping grounds in NYC...and pay their respects to the widow of their friend Haru (we lost my FIL to cancer a few years ago). Now why is this little family reunion a "brush with fame" in my book? The name Tadashi Sato doesn't ring any bells? Yeah, I am just being a sassy-pants. Unless you are a fan of modern Asian art, you would probably have no clue who Tadashi is. This was not the first time my husband and I were meeting him. We met him on a previous visit to Hawaii. It's a REALLY great thing having tons of family in Hawaii. Dont'cha just hate me now? LOL

Anyway, we got to hear straight from the horse's mouth how Tadashi got "discovered". Before he told that story, however, he just mentioned in passing his friend Burgess Meredith. DH and my ears perked up..."The Penguin??" Yep! Tadashi's best friend was Burgess Meredith! So we had to ask..."How did you meet Burgess?" And hence the story of discovery begins...

Tadashi was a struggling artist in the early 50s, working nights as a guard at MoMA. He befriended a struggling writer who lived down the street in the Village...Tadashi calls him "the little Korean fellow". I guess his name is lost to history. Tadashi used to slip him some food now and then, to the chagrin of his wife (Yes, the term "starving artist" is VERY accurate). The Sato's were struggling to get by as well. Through some friends, Tadashi got the little Korean fellow a job at a local theater on Broadway. One night at a cast party in the Village, the little Korean fellow crashed a gathering featuring the venerable Charles Laughton and a pack of hangers-on. He overheard Mr. Laughton (perhaps best remembered as Captain Bligh in the original film production of Mutiny on the Bounty) speaking about a recent art acquisition and couldn't help but blurt out "You haven't seen painting until you've seen a Sato!" The gathering laughed at his presumptuousness, but Mr. Laughton saw something in this little Korean fellow's earnestness and shushed the crowd. He took Mr. Sato's name, address and phone number and indicated that he just might call.

Sure enough, Mr. Laughton called Tadashi and made arrangements to come over to the little apartment on 110th street to view some paintings. Tadashi was thrilled and more than a tad nervous. The apartment was so small, there was no way to display all his work, so he leaned the canvases in careful stacks against the wall facing the sofa with what he considered his "best" work on top. He answered the knock at his door and ushered in not only Mr. Charles Laughton,but also Burgess Meredith and Cornelia Skinner! The three famous guests sat on the little sofa while Mrs. Sato nervously served them pastries and coffee. Tadashi stood to one side and waited for Mr. Laughton to ask to see the next painting in the stack. Mr. Laughton carefully studied the first canvas and sipped his coffee. Silence fell over the room as time passed and the collected company waited to hear what Mr. Laughton would say. Tadashi grew more nervous and began to think Mr. Laughton hated his work and didn't want to see any more. Finally, Mr. Laughton carefully set his coffee cup down and looked around the room at Tadashi's wife. Tadashi held his breath as Mr. Laughton slowly said, "Mrs. Sato? This is wonderful coffee." Burgess and Cornelia gave small snorts of laughter. By the end of the evening Mr. Laughton had purchased 3 of Tadashi's paintings, Burgess 2 and Cornelia 2...those 7 paintings sold for enough money to pay the Sato's rent for 6 months. Mr. Laughton told Tadashi he would be hearing from his friend, and gallery owner Marion Willard, owner/founder of the prestigious Willard Gallery in NYC. Tadashi called his boss at MoMA and quit. The rest is art history! 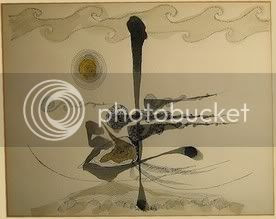 The painting pictured here hangs in my MIL's house (sorry for the crappy quality, it's under glass and the the lighting is baaaaad). Take a look here to see more of Sato's work. Now Tyler can say he played with and hugged a famous artist. LOL One last thought...Mr. Sato was also chatting today about some of his more recent works. Something the art world is unaware of? Resting Mynah is kind of an inside joke. You see...anyone who knows Mynah birds knows they don't "rest". So this painting can only be of a dead bird. Yep...road kill. Now aren't you glad you kept reading? LOL
Email Post