I had an interesting discussion with John on Friday. We were out running errands and saw some kids walking home from school. They were all dressed in the familiar plaid of the local Catholic elementary school. My instant reaction was to think about how lucky they were. John's instant reaction was "Oh those poor kids!"
I was surprised at his reaction. I argued in support of uniforms for ALL schools, not just private. Why? Because it puts kids on a level playing field. Suddenly, there is no visual distinction between the classes. The rich kids who can afford fancy designer clothes and look down on the kids who wear items from the local Salvation Army or lack finesse or their mothers dress them funny... dress them all alike and that removes one of the biggest weapons bullies use against their victims.

I was bullied unmercifully in 6th, 7th and 8th grades. My life during school hours and on the bus to and from school was a living hell. Several of my female classmates and a couple of the boys made it their special mission in life to make me cry every day. The girls would make fun of the way I dressed, my glasses, my hair, my body.
The clothes I wore were always their first target. My mother dressed me like a complete dork. I was not allowed to pick my own clothes. I would beg and plead for certain items that all the other girls were wearing and my Mother's reaction was always "Those things are too expensive. They are just a fad. It's not worth the money."
Lest you think we were in need of pinching pennies, far from it. My mother did all HER shopping in upscale department stores and my brother and I got clothes from Marshalls and Sears. If Walmart had existed back then, or if we had a Kmart that was closer, my wardrobe would probably have come from there. My mother got us the inexpensive items so she would have funds left over in her weekly allowance to buy her designer duds.
When I had the opportunity to leave the public school system and attend a private high school, I jumped at the chance. I had a private tutor, attended special classes to prepare for the entrance exam and got in to the school of my choice. I put on that school uniform with great joy. I was finally just like all the other kids. 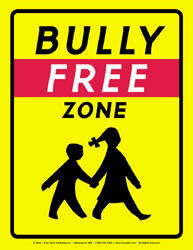 John had a very different opinion. He spent his elementary school years up until 8th grade in a private Catholic school. He HATED the stiff uniform pants, dress shoes and necktie he had to wear to school each day.
To top things off, John was also teased and tormented by bullies. His bullies were all boys. Naturally, the boys didn't make fun of his clothes. How could they? Everyone dressed alike. But they made fun of his glasses (his mother got him these awful army surplus looking frames - the thick black ones), they made fun of his braces, his hair, and most painfully, his ethnicity.
You see, John is half Japanese. In his entire school, I think there was only one other Asian kid and I suspect that kid didn't see John as really Asian. The bullies would use all kinds of racial slurs, mostly of the Chinese stereotypical varieties because they were just that ignorant, and used TV references to shows like Kung Fu and All In The Family to pick on him. Sadly, John ended up being ashamed of his Japanese heritage for a long period of time.
John was relieved when his mother told him they couldn't afford to send him to the Catholic high school and attended the public school instead. He felt an enormous sense of freedom in being able to wear what he wanted and being comfortably dressed for school each day.
In addition, some of the boys from his neighborhood that he was friendly with but who had attended public elementary school suddenly became his classmates and defenders. They were part of the popular jock crowd and went so far as to get physical with the few remaining boys who tried to get under John's skin. The rest of the boys who used to bully John attended the Catholic high school and John never saw them again.
We were both bullied. We were both scarred by the experience, but I suspect our difference of opinion regarding uniforms has more to do with the difference between how girl bullies and boy bullies treat their victims.
Girls are all about psychological torture (like rumor spreading) and personal appearance. Boy bullies are all about physical torment, vicious verbal attacks, and humiliation. In a nut shell, clothes matter more to girls than they do to boys. So I think in dealing with bullies, there are  different courses of action to be taken between boys and girls.
Ultimately, the best course of action is to prevent "the bully" from ever existing. Worst advice ever? Kids will be kids, just let them sort it out amongst themselves.
This article talks about behaviors that can be warning signs of a future bully and how to nip it in the bud. Things like avoiding aggressive behavior in the home (don't let your kids beat up on each other or YOU and don't let them witness spousal abuse), teach kids respect, how to handle conflict, praise appropriate behavior and avoid harsh punishment...teach your kids EMPATHY and avoid violence in their TV programs. Most of all, be a true support system for your kids. Make sure they know they can come to you with any problems and that you will really listen to their concerns.
Some responses to comments from my wonderful readers I'd like to share:


In elementary school, I was made fun of~ In high school, I was made fun of~  I wore uniforms in high school (in Texas most public schools now wear uniforms) and there wasn't much of a dress code in elementary school.  I think bullies are everywhere- not just at school.  Kids make fun of what they can't accept, or what is different than the norm.  Looking back now, I see that.  I was the kid at recess that sat under the shade tree and read a book- in 3rd grade.  I didn't play, and I didn't have friends.  I was different, and they made fun of me for it~  But I honestly don't think it has anything to do with girl or boy bullies- I hated uniforms in high school, and I hated the kids at my school in elementary school.  If kids are going to tease and torment, they will, no matter what they are teasing about.

I think you are right...if a kid is going to be a bully, they will find any flaw to pick on. For me, it was like the uniform was a magic thing...I would be transformed. I would no longer be the person I was, I would be someone new. Anonymous...fade into the background. And I did just that. I wasn't friends with a single person in my own class. No one knew me. No one made the effort, and I was glad. I just wanted to be left alone. And I was. For the first time, I didn't dread getting up in the morning. Maybe I was just lucky and the kids I went to school with were all a better class of people or raised better. Who knows. All I know is...for me it was all about the uniform. Silly, I know. Thanks for your comment!


I think uniforms create a hardship on low income parents , the only one who wins is the uniform companies

This is the main reason they changed the uniform the year I started high school. I was all excited to wear the pretty burgundy and gray pleated plaid skirt with the spiffy gray wool blazer (or vest in warmer weather) with the school crest on the chest...the uniform was soooo pretty. Then I got fitted and saw this UGLY teal polyester a-line skirt with a kick pleat in the front and this hideous vest. Turns out the wool they used in the old uniform was prohibitively expensive (and hot in the warmer months) so they switched to this really inexpensive fabric. If you couldn't afford the uniform, all you had to do was fill out a form and the school paid for it. Likewise for school lunches too.

Didn't matter. Ugly teal polyester...I was still happy to look like everyone else. The uniform was like a magic talisman for me...my shield of invisibility. Silly, I know. It was never really about my clothes...bullies will find any excuse to pick on other kids.  I wanted to blend into the background and disappear. And I did! Not a single person in my own class knew me well...and only the national honor kids in my study group even really knew me by name/sight. I came in second place in the yearbook competition for "most unknown student". LOL I was proud of that. I also graduated 10th in my class of 340 some odd kids and all the parents at graduation were asking "Who is that kid? How come I never heard of her before today?"
Email Post
Labels: bullies bully bullying school teasing uniforms