A few weeks ago Tyler saw a commercial on TV that really made him jump up and take notice. Now, this is really saying something because about 90% of the ads he sees between his favorite shows he will just totally ignore. (Of course that still leaves 10% that hit us right in the wallet. Why the hell does he want freakin Fruity Pebbles so gosh darn much???)
He saw the ad for The Gazillion Bubble Show. I was really surprised when he started begging me to go see it. A bubble show? REALLY?! I've been trying to talk him into going to see a show of some kind for YEARS now. Ringling Bros.? Nope. Sesame Street Live? No interest. Disney on Ice (a fav from my own childhood)? No way. Not even Dora and Diego live on stage (when he was still into those shows) would sway his interest. But now he wanted to see a bubble show. Hmm.
So I paid attention the next time the commercial came on and visited the website. It actually did look really cool. I've always loved blowing bubbles and this show took my bubble inside a bubble trick to a whole new level. I decided to see if Tyler's interest would persist and told him his Dad and I would talk about it. Usually he will just forget about things as time goes on and that's that. Not this time.
Every flippin time the ad came on, he was right up in my face asking when we were going to go. OK. John and I talked about it and John ran with the plan. He did the research on the venue and ticket prices, we discussed (at length) the optimal viewing vantage point in the theater, the logistics of taking a 6 year old who has selective hearing into New York City, and John's fears of Tyler falling down into that big gap between the subway platform and the train car.
But wait...what about Max? Yikes. He's a good baby, but there was NO WAY a show like this would hold his attention for more than 20 minutes, tops. I had horror visions of John and I playing pass the baby and taking walks into the lobby trying to keep Max in check. *sigh* It was hopeless. One of us would have to stay home with Max.
Then I had my fall on Valentine's Day and I haven't been walking right since then. That pretty well cinched it. John would take Tyler into the city to see the show and Max and I would stay home.
Well...this is the big weekend. The show is tomorrow afternoon...and what do we get in the forecast? A snow storm overnight tonight. The tickets were pretty darn pricey, so John decided he and Ty would drive into the city tonight, stay in a downtown hotel, go to the big Toys R Us store at some point and then to the show tomorrow.
They just left a little bit ago. I'm so jealous right now I could spit. LOL At the same time I am also terrified. This will be Tyler's first trip into the city. I just pray he is careful and listens to his Dad. I'm having visions of him stepping off the curb and getting flattened by a checkered cab.
Don't mind me. I'm just going to quietly panic until I hear the front door open some time tomorrow evening when they get home safe and sound. Then I will pout because I didn't get to go. ;-) John brought my old Canon digital camera with him, so hopefully he will get some good shots of Tyler in the big bad city. If so, I'll post them here on Sunday-ish. 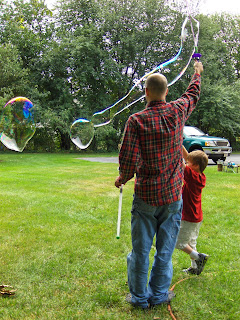 Chris said…
Ever accidentally suck in when blowing bubbles and get some of that stuff in your mouth? Ack! Burn! Ack!
4:50 PM

Anonymous said…
I'm sure the big boys will have a great time. Sorry you didn't get to go. You should have stopped off in VA on your way to NY (chuckle;) and dropped Max off with me.
6:48 PM