We're back! Oh wait, I'll bet you didn't even know we were gone. After a weekend away at my parent's house for Father's Day, we re-packed our bags and headed off to Great Wolf Lodge in PA for a short vacation. This is the same place we took Tyler to for his birthday in December. Since Tyler knew what to expect this time, it was a much different experience.

There was NO hesitation. Ty jumped right in and enjoyed the water park. He stayed on his favorite slides, at first, but I was able to talk him into a little exploring by day 2. By the time our 4 day trip was winding down, Tyler had a new favorite area to play. This is a pool he was so terrified of in December he wouldn't even walk within sight of it...the WAVE POOL!

I am so proud of him I could burst! He's had such a terror of the ocean and waves for the longest time. Does he look scared now? 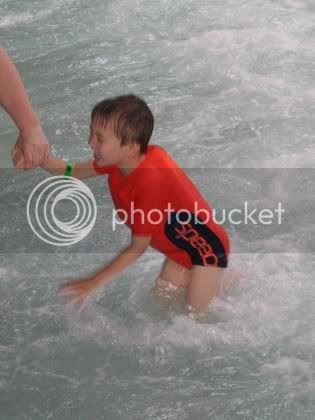 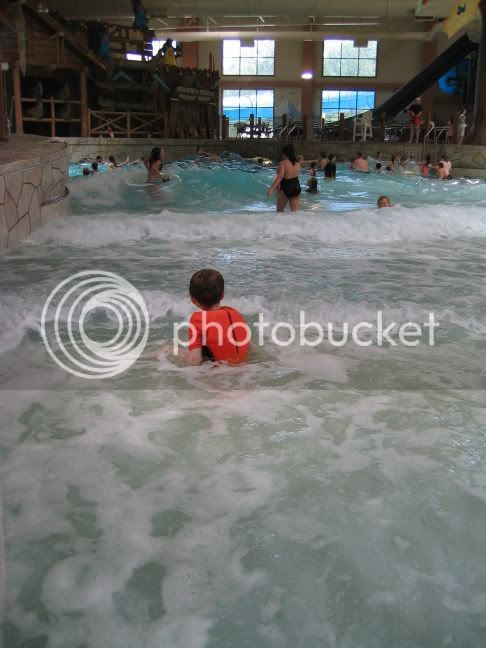 I'm glad to be home, but I miss our room at the lodge too. Vacation went by too quickly.

Adoption Search Update: We had stopped the mail while we were away and consequently had a large stack waiting for us today. In the stack was an envelope from the Department of Vital Statistics in KS. My original birth certificate has arrived. Drum roll, please? My birth mother's first name is............Elizabeth. No birth father is identified (it just says Name Withheld.) At least now I know where she was born and where she was living at the time I was born. A VERY small town about 50 miles outside of Topeka...population 170 as of the 2000 census.

John and I had another fun round of "Google" to see what we could find out about the the scant facts we now know. No sign of her on Classmates for the local high school...but there is a girl named Phyllis (same last name) who attended a year behind her (if we've done our math right). Elizabeth was 17 when I was born. Perhaps she never finished high school (at least not locally).

It's all speculation at this point, but it was interesting finding out about the area.

Included with the birth record was a list of alternate information and support groups for adoptees. First on the list was a state government agency contact name and the words "For information about adoptees that were either born or adopted in Kansas" and "Free Service" after the phone number. Hmm! Naturally, I called immediately. A lovely woman named Tina told me that she could send me a copy of my adoption records (court documents and such), anything that the State of Kansas has on file. All I have to do is fill out a form, get it notarized and send it with copies of my ID, amended and original birth certificates. I can also elect for them to conduct a search for birth family...for FREE.

I must say I am pretty darn impressed with the State of Kansas and how they treat their adoptees. It's like we are long lost family that have come home again. I can't believe the state actually funds an office whose sole purpose is to research/copy old adoption records and set up reunions. I guess a need for that is created when you pass laws to become one of the few totally "open" adoption states...any adoptee over age 18 can request their records.

Thank goodness I was born and adopted in Kansas. I feel so sad for folks who spend years searching but get no where because of the laws in the state they were born.
Email Post

IndigoSunMoon said…
The pictures are great! Looks like so much fun!
Connie
12:32 AM

Shari said…
Looks like Tyler had a great time!
Its great how wonderful Kansas is with their adoptions, I hope that you find what you are looking for!
10:10 PM

Those are some wonderful pictures. I am glad you got good news :)
6:17 AM