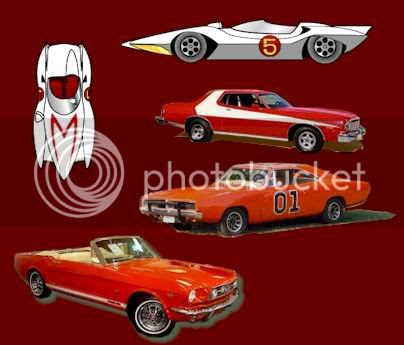 I've had a sort of love/hate relationship with cars over the years. My fascination with cars started with Speed Racer and the Mach 5, continued with Starsky & Hutch and the Dukes of Hazzard (who didn't want the General Lee parked in their drive way?) and culminated in that moment when I was handed my first Driver's License. That little piece of laminated paper with my photo on it was my ticket to real freedom and independence. No, really! It was! All I had to do was hop in my car and drive...

But I should rewind a bit. First I had to learn how. The first car I ever drove was my Dad's Ford Thunderbird. It was white with a navy blue vinyl interior (yes, that was HELL in the summer time). Very cool car, but I didn't really know that at the time. After only a couple of lessons, Dad sold that car. It was too much of a gas guzzler and mom wanted her own car. He bought himself a charcoal metallic Mazda RX7 Special Edition with burgundy velour interior (early mid-life crisis?) and my mom got a gently used camel colored Chrysler Cordoba (yes, with real Corinthian leather - gotta love Ricardo Montalban). Since I was firmly told I would never be allowed to drive the Mazda, the bulk of my remaining driver training would be done in the Chrysler. No problem! That car drove like a dream, even if it was a bit of a land barge. I figured if you could learn to pilot something that huge and parallel park it, you could drive just about anything.

I had a pink slip of paper from the DMV at 15.5 years of age - my Learner's Permit. If I completed a Driver's Ed class, I would be able to apply for my Driver's License and take the driving test at age 16 (the rest of the unfortunates would have to wait until 16.5). I was eager to be among the first of my peers to be out on the road. You BET I was aiming to have that license the second I turned 16. Driver's Ed was a breeze. It was fun driving around the streets of Arlington with a few of my classmates in the back seat and the driver's ed teacher up front (with his extra break pedal, which came in handy once, when I almost took of some idiot's car door).

Driving with my Dad was another story. His idea of driver training was strapping himself into the passenger seat, pointing out into the wild blue yonder, and saying "Drive." Good thing I had paid attention when my Dad started up the car and drove around. I knew where to put the key, which pedals were which, and how to put the car in gear. He would just sit there looking at me or out the window until I did something wrong. Then he would yell.

"COME TO A COMPLETE STOP AT A STOP SIGN!!! ARE YOU TRYING TO GET THE FRONT END OF THE CAR TAKEN OFF?!!" Sorry. "DON'T GUN IT THROUGH A YELLOW LIGHT!! YELLOW DOESN'T MEAN SPEED UP!!!" Sorry Dad. "USE THE DAMN MIRRORS WHEN YOU CHANGE LANES, DON'T LOOK OVER YOUR SHOULDER!!! ARE YOU TRYING TO REAR END SOMEONE?!?!" Yes sir! No sir! Sorry!

By the time we would get home from our little driving expeditions, I would be a shaken nervous wreck and my Dad would be pissed off beyond belief. Patience of a saint, that man. Patience of a saint. Luckily for me, I was a fast learner. In just a few weeks, the yelling was much less frequent and I even got an occasional "Nice job" from Dad. Whew!

The big day finally arrived. Time to go to the DMV to take my exams. I was going to take my road test in my mother's car. Might as well drive something that I'm familiar with, right? The sky was a little overcast when we left, but it wasn't supposed to rain that day according to the weather man. My Dad was confident in my ability and decided to sit back in the passenger seat, relax, and read his morning newspaper. The rain started just about the time the Cordoba hit Rt.128. My highway miles driven thus far? Very few. Driving in bad weather? Never. Knowledge about 18 wheelers and their "blind spots"? None. I merged onto the highway, no problem. I was maintaining the speed limit. There was a big rig in the next lane over. For some reason, he was going slower than the speed limit and I was overtaking him on his right side. He chose that moment to move over. No signal. No warning.

I had learned a bit about hydroplaning in Driver's Ed, so I was aware of how that could happen and what you were supposed to do. In theory. When you suddenly hit your brakes on a newly rain dampened roadway because a big rig decides to try and side-swipe you and the car you are driving goes into a spectacular 360 degree spinout...what do you do? What would Jesus do? Pray. OK. I prayed. Oh God, oh God, oh God, oh God!!!!! And some driving instinct I didn't even know I had took over. I managed to turn the spin into a sideways skid. The car skidded right off the highway, sideways over the breakdown lane, and onto the grass.

The car came to a halt facing Rt. 128, my face was buried in the steering wheel. I remember thinking who is the idiot honking his horn when I realized I was the idiot. My forehead was pressed against the horn. I glanced sideways at my Dad as he was peeling his newspaper away from his face. "WHAT THE HELL HAPPENED?!?!" Uh...[stammer stutter] truck...almost...hit...I...breaks...uh...uh...um... "GET THIS CAR BACK ON THE HIGHWAY!! NOW!!!" [meekly] yes sir.

Yep. Only *I* could manage to have a near accident on the way to her driving test. I carefully pulled back onto the highway and made it to the DMV testing facility without further incident. It seems no one even noticed my near miss. Certainly, no one stopped to check on us.

Testing consisted of an oral exam and then a road test. I had studied my little blue book front to back, back to front. I was ready for them to ask me anything. What challenging questions was I asked? "What does a yellow light mean?" Yield to a stop, there is a red light coming. "What does a blinking red light mean?" It's just like a stop sign. Stop, look both ways to check for traffic and proceed when clear. "What is an intersecting way?" Um... I remember saying something about the point where two roads cross. I was nervous. Then the tester held up a picture of a road sign with no words on it. "What's this?" Um. A railroad crossing sign? "Fine. You pass." That was it? I was all in a dither over THAT?! Um. OK! On to the road test!

I was all hopped up on adrenaline. A few deep breaths and I was oozing that cool self-confidence that all teenagers have [giggle!] OK fine! I was able to fool myself into thinking I was a good driver! It was enough. I passed. I even took a good license photo!

More in my next entry.