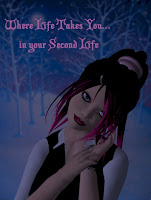 A couple months ago I was watching an episode of CSI: NY that featured an online "game" called Second Life where a real life predator was locating and kidnapping women he'd met in the game, but IRL (that's In Real Life for those of you who don't spend much time online). The CSI gang had to enter the game world to track down the bad guy.

Cool stuff...but what made it REALLY interesting to my inner-geek was the cyber tie-in they did with the real game of Second Life (apparently there is a virtual CSI area in the game you can visit). I'd heard of SL, but, like Worlds of Warcraft (WoW), I had been avoiding it because I was afraid of the time-sucking vortex these SIM games tend to be for me. I'd fallen into the snare of The SIMS a couple years ago and woke from a gaming trance months later wondering how so much time had passed.

Turns out I wasn't the only one who was concerned. John had been playing SL for months and didn't tell me. He claims it was out of fear that I would become addicted. Uh huh. Sure. He just didn't want me to find out about his harem of SL girlfriends. *wink wink* But seriously, that was a fear for about half a minute, then I came to my senses. I realized John is just as much of a geek as I am and the lure of an entire virtual universe where you can be whom ever (or what ever) you want to be is too cool to be ignored. 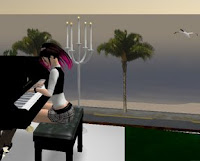 So, since that episode of CSI aired and I got that startling confession out of my husband, he has become my SL mentor. It's nice to have someone show you the ropes. The world of SL is really overwhelming. There is so much to do and see, it's hard to find a place to start. I am still a noob (newbie), but I've already found a few places I like to visit. I like to sit at the baby grand in the piano lounge of the Imperial Hotel and play classical music. The lounge overlooks the bay and it's really relaxing to hear my avatar play Claire De Lune while the waves crash and the sea birds call.

I enjoy taking demo flights in the helicopters at J&S Aviation. I did manage to wreck the CTH-100M copter I was flying last night. I went down in flames into the water and my poor avatar got stuck in a very undignified position. Nothing a little game restart didn't fix. Heh.

I bought a little euro-style scooter at a city on the brink of apocalypse called Blissville and I have a blast speeding over hill and dale on that thing. It's a bit hard to control and I tend to get stuck up in trees and whatnot. Still, not a bad way to get around. All avatars can fly, but that gets old after a while. (John's avatar just gave me Pegasus tonight, so I have yet another way to get around, but it's more fun when his avatar puts on a unicorn suit and saddle...more like a real horse, unpredictable.)

Then there is The Trivia Lounge where I can hang out, have a drink and answer trivia questions to win some of the currency of the land (called Lindens). Lindens are pretty important if you plan to buy clothes and things for your avatar. I don't have enough $L yet to rent or buy any property, but John lets me borrow the beach house he shares with a buddy of his. Nice place, but it could really use a woman's touch. Naturally I have the urge to redecorate, but I've been told no. (I need a nice ocean front hut of my own, I guess.)

Mainly, I am just getting a kick out of having a goth alter-ego. I've often said if the "goth" lifestyle had existed when I was a teen, I totally would have embraced the look and music. Now, I sorta can. I spent most of my first month in SL working on a signature look for my avatar. It's really amazing how complex the game can be, but it is also easy at the same time. I'm interested in some of the role playing communities (there is even a space station with a pseudo-Star Trek theme where you can park a star ship and engage in battles with the Klingons or whoever.) You name it, it's probably in there.

Maybe tonight I'll go snowboarding...or maybe scuba...or go back in time to the age of dinosaurs. Hmm. Or you'll just find me playing piano at The Imperial Hotel. Ha! I am a creature of habit.

Do you have a Second Life? Let me know! I'll give you my contact info and you can show me your hang-outs. Or we can just swim in John's pool. In my second life, I can wear a bikini. :-)
Email Post

Astaryth said…
I've thought about checking out Second Life or World of Warcraft, but like you am not sure I can spare the amount of time they are sure to eat up. I spend waaaay more time on the internet -now- without having those time-suckers LOL! But, I may have to reconsider......
2:01 PM

Anonymous said…
Sounds like my cup of tea, I am going over and check it out. It sounds like a lot of fun to me.
Barbara beckerb6@aol.com
4:22 PM

Anonymous said…
I want a laptop. I want a laptop so's I can sit on my sofa in comfort and play these games! Otherwise I will be spending my entire life sat here in front of my computer when I start world of warcraft, which I will eventually, but am putting off for as long as possible. Getting things done, saying farewell to my loved ones, stocking up on food, gazing at the outside world, trees, birds, fresh air... it will all be gone once I start ;o) And now you tell me there's another? Sigh :o)
Sara x
3:35 AM

Anonymous said…
tried second life but really not impressed on the other hand I spend most of my life on World of W arcraft where I am dwarf...........

IndigoSunMoon said…
I have dial up...can't get cable or dsl out here in the sticks, so I cant play games like that. I would love to though!
Connie
8:57 AM