Well, things seem to be winding down...the doorbell isn't ringing as often. Over all, I was depressed with this Halloween celebration. Tyler's school pumpkin picking trip was cancelled due to rain and we never had a chance to go on our own. No pumpkins this year. No carving, no roasted pumpkin seeds...it's just too sad. I managed to jam in a nap this afternoon but I never expected the doorbell to start ringing before 5pm.

I had to speed through a shower because I knew John couldn't be bothered with my glow bracelet procedure (those were to be the last item slipped into the treat bags to maintain maximum glowability). I'd say the first 25 kids or so got cheated out of that extra Halloween goody. I made up 71 treat bags and swiftly ran out. John broke into my personal stash of fun sized candy to tide me over as he ran out to a local store for more candy. That was a first! I had to give a couple of older kids some safety pops that I'd bought just for the wee ones while I waited for John to hurry back.

Then there was the local police department. They totally upstaged me this year! As the patrol cars went through the neighborhood, the cops gave every kid they saw these really nice battery powered flashing necklaces. Tyler came home looking like a disco ball! My tiny little glow bracelets were totally lost in the glare. Grumble, grumble...but seriously, thanks to the boys in blue for going over the top to protect the kids. Plus there were several other houses giving out glow items. The kids started to look like Christmas trees by the end of the night. But I'm pretty sure I was the only one giving out goodie bags with temp tattoos, kazoos, finger puppets and candy. I win!

As for my costume? Once again, no time to put on makeup for my over the top Disney costume (plus I was afraid it would scare Max). Last night I had a brain storm. Since I just got a cool new baby carrier - a mei tai style wrap from my friend Heather at http://MaMaMadeProducts.com - it is in a cool Asian brocade that would match well with this nice kimono I wore a few years ago. I dressed as a Samurai for a Halloween party back then. So I could wear Max and he'd make a swell costume accessory! I looked high and low and could NOT find my kimono anywhere! I was so bummed! I considered wearing my Goth vampire garb with my pretty velvet cape, but it was so warm today. I finally decided to wear one of my Hawaiian muumuus (moo moos). I never had time to find my artifical lei, so I probably just looked like I was sitting on the front steps in my dressing gown.

Naturally Max got hungry just as the doorbell really started to heat up. I had him in the mei tai and was feeding him with one hand while I gave out candy with the other. The boys had already left to go trick or treating, so I was on my own. I got a little stressed trying to manage, but Tyler tired out rather quickly again this year so they only did our street and didn't venture out into the neighborhood.

It's 8:30 now and the doorbell has only rung twice as I've been typing this. It's a school night, so I can't imagine we'll have too many more visitors. John really went overboard on his last candy run, so I think there will be leftovers. Sadly, he bought candy types that I don't care for. Or maybe that's a good thing.

At least the boys both looked really cute! 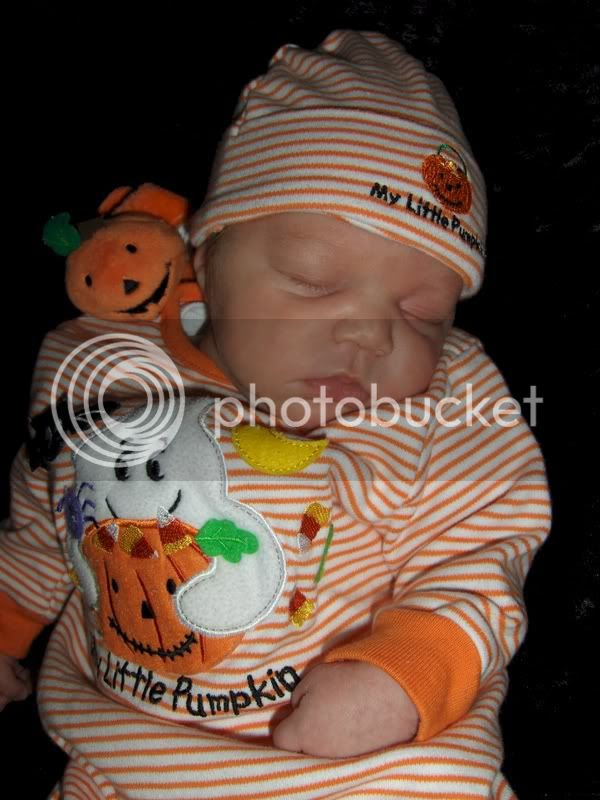 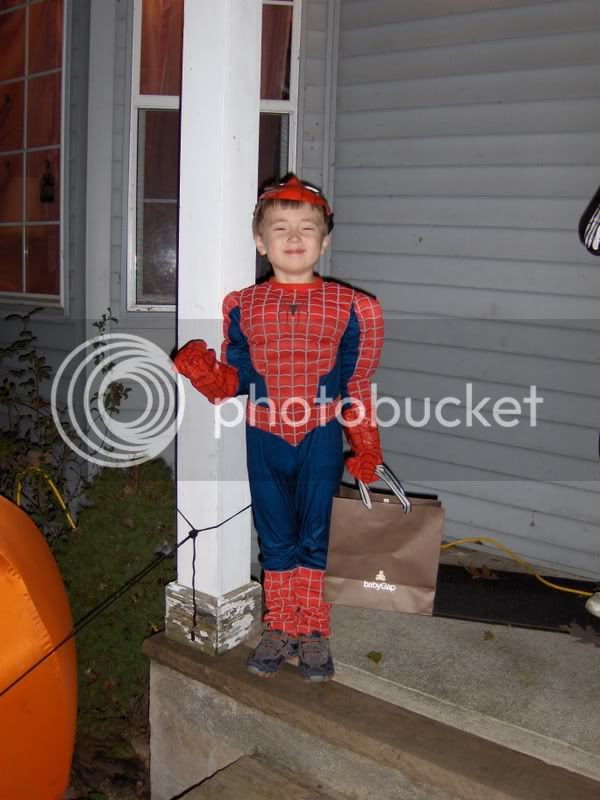 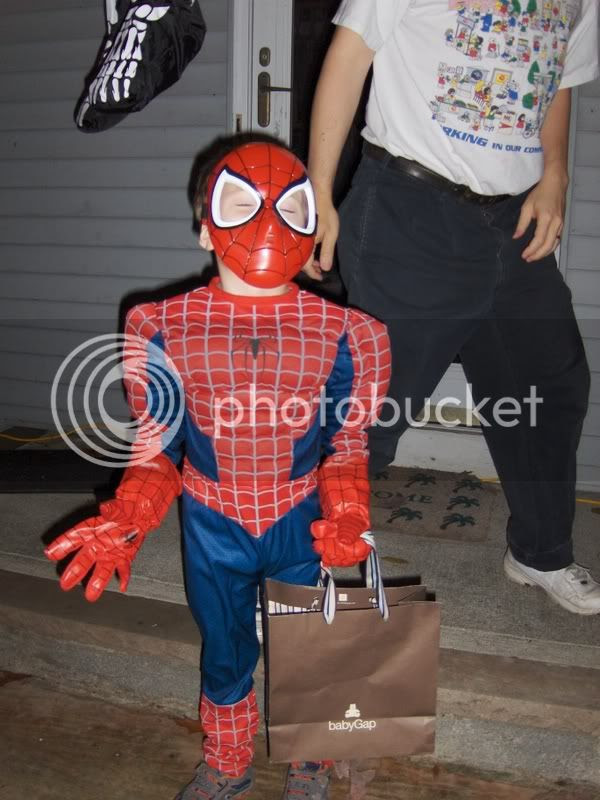 Astaryth said…
What a brave looking Spiderman and adorable pumpkin!!!

BosieLadie said…
The boys are adorable! Happy Halloween!
12:17 AM

Anonymous said…
All in all, it sounds like that you all had a good Haloween. Life isn't perfect. Don't sweat the small stuff as the saying goes. Now that you have two children, maybe things are not going to be as picture perfect that you would like. The children looked great and I'm sure Tyler had a grand time. Wow, that's pretty good of the local police handing out flashing necklaces. Relax Mom.
8:22 AM

Unhinged said…
If I come knocking at your door with my black wig on, will you give me one of those glow bracelets? I'd love to honk on one of those kazoos, too, and wake 'em up at work but good.

Anonymous said…
you sent him out without a proper candy holding device?? i mean, a baby gap bag?! wow run out today and grab a plastic pumpkin bucket on clearence for next year!!
10:05 AM

Magogo's Musings, too said…
both kids look so cute. i'm glad you got so many kids at your door. this year i was afraid i could do nothing, but ended up putting candy out with a sign saying i'd see them next year. margo
11:05 AM

They are both too cute :)

mygirlboutique@gmail.com said…
Sarah wanted to be spidey for a while. She then wanted to be Stephanie from Lazy Town. But Target was out. So, she went as a centipede.

Punkin Max is adorable. Spidey looks like he could kick some serious bootie.

Sara said…
Awww, you have way more fun on Halloween than we do!! We had two knocks on the door, two little witchy girls both times. And that was it!

Tyler makes a fab Spidey, and aww look at your Max, how cute :o)

Karen Funk Blocher said…
Sounds as though you have the same basic procedure we have on what to give out - except that your actual toys were cooler. Along with the candy, trading cards, spider rings, toy critters and pirate gold, we had Play Doh! And yet, one kid complained that she already got Play Doh from another house!
8:30 PM