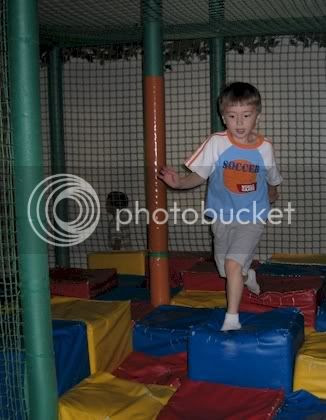 It's official. I have a four year old with a better social life than me. Ha! He has been invited to a birthday party every weekend this month. Who knew September was such a popular month to give birth in?!

So far, we've attended two parties (with one more next weekend). I haven't bought so many toys at Walmart all at once in a while. It reminded me of Christmas shopping, except I bought 4 of each thing. I was surprised how hard it was to decide on what to get. They are all 4 year old boys, same as mine...so easy, right?

No. I know MY boy, but I have no clue what these other kids are into. So I went with an assortment of things for each boy. Age appropriate card game, a soft foam ball for tossing around inside as the cold weather sets in, a pack of travel sized containers of play-doh, a Matchbox car, and a NASCAR branded PEZ dispenser.

I was always more excited to get lots of little gifts rather just one bigger one when I was a kid. I hope they liked what we picked out, since no one seems to open gifts during the party any more. Which leads me to the first of many observations I've made...

1. I have no idea what kind of gifts the boys received, because the gifts were opened some time later. I also have no idea if they liked what we gave them, since we weren't there to see the expression on their faces. I know it's easier on the parents if they don't have to deal with their kid (or others) wanting to open and play with the toys immediately, but I really miss the excitement of watching a kid tear into wrapping paper and the look on their face when they love, or hate something. LOL!

2. Hardly anyone around here has a simple home birthday party any more. Most opt for having it at one of the local play places. (The party this past weekend was held at a home, but the parents rented this giant inflatable bounce-around castle for the back yard and a full sized cotton candy machine. Very cool.)

3. I am totally nosy about some things. I fell in love with the house the last party was at and wondered to John, on the way home, how much they had paid for it (they recently relocated here from California). He popped on Zillow.com when we got home and told me the appraised value of the house is $678K. Ouch. No way we'll be moving to THAT neighborhood anytime soon. Amazingly, John really liked the house too and said if it were more in our price range, he'd move. LOL! I'll never figure him out.

4. I encountered my first instance of anti-SAHM sentiment. One of the mom's commented to the group how glad she was to finally be at a party with only working moms (I wisely kept my mouth shut.) She said she hated SAHM moms because they were "boring" and she has nothing in common with them. She was enjoying talking about after-care (some place to stick your kids once school lets out) and commuter woes with the other moms. Hmm. I made a mental note not to be boring, if I could avoid it.

5. It's insane how much it costs to put on these birthday parties. $135 an hour at a local play place and that doesn't include any food, paper goods, cutlery or goodie bags. Every party has served pizza to both the kids and adults, cake and/or cupcakes, goodies bags loaded with cool toys and prizes, drinks and even a pinata... We'd better start saving those pennies NOW if we have any hope of doing a party for Tyler in November or December.

6. Speaking of pinatas... since when did they replace the good old fashioned "whack it with a stick" kind with these new-fangled "everyone pull a string until the magic one releases the goodies". Feh! Give me a blind-fold and a broom stick anyday. I've got bottled up aggressions, dude!

7. And speaking of Tyler's birthday... it's the weekend after Thanksgiving. Will anyone go to a party that is so close to a major holiday? The weekend after that and we are starting to push a bit close to Christmas (those working moms will be using every weekend to get Christmas shopping done). Not to mention the risk of poor weather. I'm thinking we should have a party in early November, but I'm just not sure. At least Ty has our now annual tradition of a weekend at Great Wolf Lodge to celebrate his birthday with just Mommy and Daddy to look forward to.

We've thought about having a party there...but paying for water park tickets for a dozen or more people (kids and adults)? OUCH! Plus who will drive for 50 minutes to attend a party, even if it IS at a cool indoor waterpark in the winter.

Chris said…
Yeah, our social lives are primarily driven by our children's activities.

Trevor is having his party (bday is actually end of August but it sucks to send out invitations the first week of school when no one know him) next weekend. His choice? It is at the American Museum of Science and Energy, which has hands on projects and stuff. I was so proud he picked that on his own!

BosieLadie said…
I've always fixed a big dinner, like barbqued hamburgers and made a cake, inviting all the neighbor kids and our families. Not necessarily ON the birthdate, but around the birthdate. One year, instead of cake or cupcakes, I made a cup of dirt with worms! A huge hit at my son's birthday party. Let me know if you want the recipe. If it were me, and a child's bday fell on the long Thanksgiving weekend, and I wanted to have a kid party, I would do it early, a week or two before Thanksgiving. And, I've never heard of not seeing the kid open his birthday gifts in front of the guests.
1:25 AM

Magogo's Musings, too said…
Now I know why I have no social life- I don't work, and have no small kids! I was wondering why. I never heard of not opening presents in front of the guests. Times have changed a lot! Margo
11:50 AM

Shari said…
I swear we do more running to the kids social events then our own too! I know what you mean with a December birthday here, and Peter is Memorial Day weekend. I think you should be great the weekend after Thanksgiving!
1:38 PM

Sara said…
Yay Tyler, must be a popular boy, getting invited to so many parties :o)
Sara x
5:03 PM

Anonymous said…
i've always had that with my oldest daughter, her b'day falling right around thanksgiving...have found that parties the week or so after the holiday usually have the better turnout than parties before. is a busy time of year for sure...hey that zillow site is amazing! had no idea there was a sight like that! netti
2:31 PM

Anonymous said…
WOW. Things have changed since my children were young. Can you imagine what they will want when they are in high school? Maybe others would prefer to have home parties, but feel one must keep up with the Jones. The weekend after Thanksgiving will be a perfect time for a party, before school starts up again. Good luck.
8:49 AM

hestiahomeschool said…
I just dealt with the anti SAHM mom thing the other night, with a young woman who was young enough to be my child...sigh...I tried not to let it hurt. I KNOW I am not boring!
11:27 PM