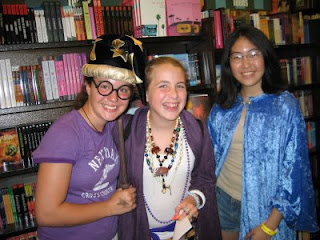 So where does your average 39 year old housewife and mother go on a Friday night? Why, to The Midnight Magic Party at her local Barnes & Noble booksellers in Ledgewood, of course!

This was a first for me. I usually pre-order my books and they are delivered on release day. This time, I wanted to be part of the Harry Potter madness. I was completely unprepared! The first thing I noticed when I arrived was a long line outside the store. Huh? Apparently, the store was filled to capacity (according to local fire codes) and we all had to wait just to get inside.

While in line, a friendly mother with her 3 kids in tow asked what the number on my "wrist band" was. Huh? Wrist who? Apparently, the folks who were smart enough to PRE-ORDER the book with free in-store delivery were issued a wrist band earlier in the day. Uh oh! I said to the woman, "I didn't pre-order and I don't have a band. Am I totally screwed?" She assured me that I was probably fine, but I would have a long wait.

At least the people watching was primo! I was unsurprised at the number of 5-13 year olds. I was down right stunned at the large number of 13-20 something year olds! And in costume, no less! I felt horribly under dressed in my shorts and t-shirt. I found myself wishing for my burgundy witches wig and pointed hat. And a wand! I want a wand!

Luckily I didn't have to wait outside in the sweltering heat for long. The party started at 10PM and I was inside and looking through the stacks by 10:25. B&N must have made a killing tonight. I spent $115 dollars on BOOKS. Smart people having us all wait until one minute after midnight before the book could be sold. What else do you do in a book store for hours while you wait? Shop!

I found a couple of books to read, a couple of books for Tyler (who I am glad stayed home...he would have run out of patience within 10 minutes of waiting outside in the line), and a special coin collector's binder in which to put our State Quarter collection.

I then found myself a prime people watching spot and plopped myself onto the floor. All the chairs and benches in the place were long since occupied and no one was giving up their seats. I snapped a few photos, read a few pages in each of the books I had selected, flipped through some random books off the shelf close to the floor in the young adult fiction isle where I had planted myself; but mostly I watched the kids and listened to their conversations. Kids are so funny.

Two trios of girls particularly caught my eye. One trio looked to be about 13 or 14. The other group were more like 16 or 17. All were dressed in appropriate wizard and witch apparel. So cute! I stuffed down my shyness and asked the younger girls to pose for me, which they happily did. I include that photo above. The other group I basically stalked at various points throughout the store trying to snap a candid shot of them.

I also took in the various crafts and activities that had been set up for the kids...make and decorate your own wand, win candy and stickers if you can answer book related trivia question, have your photo taken and placed in a special folio, have your face painted and temporary tattoos applied...fun stuff! Oh how I wanted to make a wand, get my face painted, tattoo'd, and win some prizes. But I restrained myself.

Finally 12:01 arrived and the loudspeaker announced that Harry Potter and the Half Blood Prince was ON SALE. A loud cheer went up from the crowd and I felt a surge of joy. The joy faded as the hoards of wristband wearing patrons lined up as their numbers were called. First yellow wrist bands numbering 251 to 600...then orange. *YAWN* I was getting pretty tired and my legs and feet were aching.

At long last, the isles were beginning to clear and I was able to plop myself into a cumfy arm chair wedged between religious fiction and the home improvement section. MUCH better. My eyes were growing heavy and my yawns more frequent. Ah! All the idiots who didn't get a wrist band can now get into line! I struggled out of my low and squishy chair and hobbled to the back of the store. I was second to last in the line...but the line moved swiftly!

I had my purchases and was out of the store at 1:25AM. Whew! When I got home, I eagerly emptied my bag on the sofa to snap a photo of my booty when I spotted them. YAY!!! All the cool prizes they had been giving away all night? All of them were tucked into my bag. Harry Potter style eyeglasses, a temp tattoo, stickers, a wrist band like all the teens are wearing to promote various causes and a poster. I squealed like a pre-teen, tore off my boring eyeglasses and tried on my Harry spectacles. NEAT!