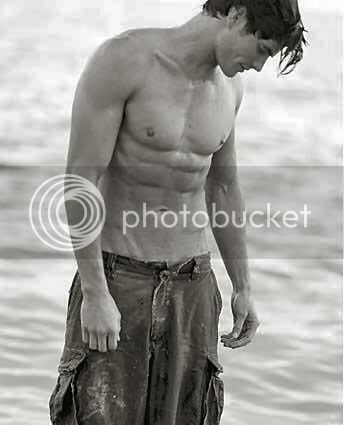 This entry strays from the norm a bit, and since I don't have a warning on my journal that it may contain adult content, I will keep things tame.

I had a really interesting and bizarre dream last night! Of course I love bizarre dreams - the stranger the better - but I don't often dream that I am not my own gender. Last night the main character in my dream was a man and I seemed to view events as they unfolded from his point of view. I'm not sure where to start, so I will just jump right in before the dream totally fades.

I am a 20-something Italian fellow having an affair with a married woman. When I say Italian, I mean in more ways than just looks and heritage. I SOUND Italian. I have a heavy accent. Very sexy. I still have a pretty vivid image of what he looks like, so I went surfing for a photo illustration for the benefit of my straight female and gay male readers. This photo is pretty darn close - look to the right. The earliest part of the dream I recall...I was waiting for my lover at the foot of a staircase in some kind of parking facility. She is a late 30s, possibly 40-something very attractive woman. She is curvy with strawberry blond hair and very fair skin. She takes extra pains to protect her skin from the sun. She is wearing a wide brim white hat (very fashionable), dark sunglasses, a white silk scarf and white summer suit with a fairly short skirt. I'll skip on past the steamy love scene in the stairwell of the parking garage... Turns out we were killing time before a morning appointment with her divorce attorney. She wants to leave her husband for me.

After the appointment I ride back with her to a very chic contemporary beach house. We have some more fun in the gorgeous sunken hot tub on the balcony outside her bedroom, over-looking the ocean. We hear her husband arrive home (probably for lunch) and I make a dramatic getaway over the side of the balcony and drop two stories into her gardenia bushes below.

Skipping ahead past scenes of me/him walking on the beach and her showing up on my doorstep (a very small apartment, but tastefully decorated) in the later part of the afternoon. Here is where things start to get even stranger. I entice her into coming with me to a place I used to work at. It's out in the country a bit...a converted barn being used as an auto shop for high-end cars. I want to make love with her in the back seat of a very expensive convertible parked out on the lot. It's in amongst lots of other cars, most are covered with car covers. I spot someone I know filming us from the rooftop of the barn and someone else filming from the floor of the old hayloft. I leap out of the car and what follows is a sort of surreal Woo-ping Yuen scene with lots of impossible martial arts flying and fighting. I also seem very adept at the use of a bull whip. I confront the men once I have them beaten to near pulp and tell them to back off. Turns out I used to run a scam with these guys, luring wealthy women to the garage for illicit fun while my buddy's filmed us to use later in blackmail schemes. I guess I really HAD fallen for this woman. I am forced to confess my "past" to my girlfriend, but she doesn't care.

There is other assorted weirdness in there...like the scene where she has to speak with me and wanders in to a men's locker room looking for me. Lots of steamy nudity there, but she is acting embarrassed and averting her eyes very cutely. LOL She gives the impression of being proper and a bit prim...but I bring out the worst in her. I am a very bad influence, I guess.

I just wonder about this fellow's back story. Where does an Italian import get skills with a bull whip and martial arts? Why was I once working with a group of obvious low-lifes? From my looks, it's pretty clear I can get darn near any woman I want. I guess my current love was originally going to be a target for the racy film blackmail scam, but I fell for her instead. And the biggest question of them all...WHAT THE HECK IS GOING ON IN THAT TWISTED SUBCONSCIOUS MIND OF MINE?!?! AND WHEN CAN I EXPECT MORE?!?!? Tonight would be good...
Email Post