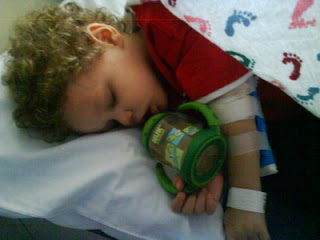 So the culture has pinpointed the bug as Streptococcus pneumoniae bacteremia (blood stream infection). The source? An undiagnosed inner ear infection (masked by the redness and swelling of his outer ear infection). What leaves me confused is that Max had a prevnar shot which I thought would make him immune to this particular bug. Maybe someone in the medical know can educate me more there.

The broad spectrum antibiotic has been 86'd in favor of something stronger and more targeted. I was told the name of it this morning but of course it's flown right out of my head.

The good news is his lymph node swelling is way down and Max finally ate dinner tonight in a quantity that was close to normal for him. Whew! It's just down right spooky when that kid doesn't eat. He loves just about everything, usually. Unlike Mr. Pickypants Tyler.

So please, nice hospital people, let him come home tomorrow afternoon! Crossing fingers and toes again. He is so totally done with this little adventure. It will be a miracle if he ever allows anyone wearing a white coat to come near him again.

And the food people got his meal right for dinner tonight. Finally! But he didn't want what we ordered. So I had to call and request something else anyway. Figures. I know they must hate us down there. ;) I also just found out that we can get our parking validated since we are the parents of a peds patient. Would have been nice if someone told us that on MONDAY. While parking fees don't break the bank, they aren't exactly cheap either.

Oh who am I kidding. I can't really bitch. I'm just too relieved. I will blame Aunt Flo for my extra dose of cranky over the last couple days.

Honestly, the folks at Morristown Mem are super nice and very helpful. Bless the nurse who listened to Max tonight and took his complaint of pain in his IV arm very seriously. She must have spent over 45 minutes gently trying to pry and swab off all that tape the vampires had wrapped around Max's arm to strap him to that board thingy (to keep his elbow from bending) so she could re-wrap it in a stretchy sleeve thingy instead. Max sobbed the whole time because the tape was just ripping his skin to bits. Add in alcohol swabs to kill the stickum on the tape and ouch! That stings. But he was a much happier camper when she was finally done. It wasn't the IV causing the pain, thankfully. It was where the tape and that immobilizer board thing were cutting into his skin.

Oh! And with his fever officially gone for 24+ hours he was finally allowed to play in the playroom this afternoon. He was in heaven! So many toys in there he flitted from thing to thing, not knowing what he wanted to play with most. That certainly made the day go by much faster too.

ok. Enough with the babble babble. Time for some much needed sleep.
Email Post

I hope Max gets bailed out ASAP and heals up fast. And I pray that all of you get needed rest and get back to your normal routine in no time.

Donna H said…
So happy that Max is on the mend! I hope you get your much needed rest.
Hugs all around!
Donna:)
8:24 AM

Astaryth said…
whew! So happy to hear they finally figured out what is wrong and Max is on his way to recovery and feeling better. It's still scary, but a little better when you at least KNOW what is wrong!

cw2smom said…
Oh my! Glad to hear he's on the mend, poor baby! IVs are the worst no matter what age...but especially hard on the little ones!You parents need to take care of yourselves as well! Hope you are all home getting rest soon! Blessings, Lisa
6:03 PM