Who else here has spent time living in the North East? Anyone remember the blizzard of '78? If you are from New England, you know that the old timers still talk about that storm every time the weather looks like snow. It was THE storm of the century, especially in the mind of 12 year old me.

We were out of school for nearly two weeks during and after that storm. For a kid, it was the best time ever! We didn't really pay much attention to the power outages and the intense frustration of our parents as they tried to dig a tunnel out from the front door or tried to clear the drive way after the snow plow had buried it for the 50th time. All we saw were the 12+ foot high snow drifts and the killer sled course we build in the back yard (nice slope back there).

Those drifts! My imagination was working feverishly. We could have an entire network of tunnels all through the front yard, build rooms, heck - we could LIVE out there under the snow! We decided to start small. A few of the neighborhood kids, me and my little brother decided to build two forts across the driveway from each other. That way the drive became like a river and we could attack each other with furious snowball barrages from either bank. We set to work. My brother was more of an annoyance than a real help at that age. He is five years younger than me. He was trying to help me dig, but was just in my way.

I came up with the brilliant idea of sending him down to the street level to dig an "escape route". The plan was for him to dig a tunnel toward me and I would tunnel toward him, meeting somewhere in the middle of the bank to join the two tunnels. It was going great, until I ran into some big chunks of ice buried in the bank. They were probably frozen hunks of crud the plow had heaved up into the driveway and my dad then hurled into the growing mounds on the sides of the driveway. I went into the garage and got the heavy duty steel spade my Dad used to dig fence post holes and such.

I was chopping away merrily at the blockage and working in pretty close quarters. Our tunnel went down about 5 feet at a steep angle and then across about 6 feet just above the level of the grass. I stopped chopping long enough to hear my brother through the wall of snow. "You're almost through! Dig faster! Dig faster!!"

I was scraping and chopping with renewed vigor and I began to see a glimmer of daylight. I paused and my brother's mittened fingers poked their way through a newly opened gap. I pinched his finger tip and he yelled with excitement! I picked up the spade and gave the hardest chop I could and the spade went right through and into my brother's face. I heard a scream, but I didn't realize, at first, that this was a scream of pain and not excitement. I kept chopping until it registered that someone was yelling "STOP! STOP DIGGING!"

I wiggled backward up the tunnel and out into the light. My friends were clustered around my brother as he held his mittened hands to his face. "What?!" I yelled in confusion. My brother pulled his hands away from his face with a moan and I saw blood pouring down and dripping off his chin.

Turns out that big chop had caught him right between the eyes, across the bridge of his nose. It bled a lot and I thought my parents would rush my brother right to the ER. Nope. My dad pinched the cut closed and held it with paper towels until it stopped bleeding, then he put a bunch of gauze and medical tape on it. I didn't know then that the ER's were over run with storm related casualties and people were being warned to stay away unless it was a SERIOUS emergency. Good thing that shovel wasn't a little more to the right or left. I would probably have put my brother's eye out.

My parents got crazy angry with me for not being more careful, but at least they didn't think I did it on purpose! My brother actually came to my defense for a change and told them it really was an accident...and could we please go back outside and finish playing in the snow? What a trooper! Oh, and the forts and tunnels we eventually built were incredible! We had a 3 bedroom "house" in the front yard, complete with a kitchen. We dug out shelves and had snacks and stuff stored out there in our "kitchen"...I just grin when ever I think about it!

The only other stupid thing I did during that storm week was build one of our tunnels/rooms into the snowbank that lined the street along the front yard. Why was that stupid? We played in there for hours until it started to get dark. Within minutes of us vacating the space and going indoors for dinner, a snowplow came along and completely destroyed it. If we had still been inside there when the plow came, there would have been two more lives lost to the Blizzard of 78! 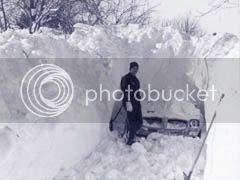 Yep, that is a car buried under there.
Email Post