An entry over at The Peach Pages today sent me down memory lane. When my husband and I first got married, we were renting this tiny two bedroom cottage in Denville, NJ. The place was build in the 1920s and had a natural river stone foundation. It was a former vacation cottage (near the lake) that had been converted into a full time dwelling. It was cute, but there were gaps in the foundation. This left the basement open to habitation by unwelcome critters.

My cats had a field day when they moved in! They were bringing me little mice on an almost daily basis. A pretty rare treat for an indoor cat...they didn't have many opportunities to hone their hunting skills in my other apartments or my condo (just an occasional moth or bee).

At first the mice seemed content to stay in the basement. I adopted an "if they don't bother me, I won't bother them" attitude. I saw no evidence of poopies in my cabinets or holes chewed through my cereal boxes. Then came the day one of those cute furry critters ran right over my foot as I was watching TV. I am not at all squeamish about rodents. I've had many as pets in the past, but this made me jump. I wondered what made him venture upstairs where the two cats were?? Seemed pretty suicidal to me.

I started seeing more signs of the mouse invasion of the upstairs and was on the brink of calling our "landlord" (he was a high school buddy of my husbands). Then the cats deposited a new prize outside my bedroom door. A dead snake. Holy crap!! Where did they get THAT from??? I told John about it when he got home from work and he promised to call our landlord soon.

That weekend, we were being exceptionally lazy and sitting around the house. John decided to go back to bed for a nap after all our exhausting hanging out and doing nothing. He went into our dark-as-a-cave bedroom (love those blackout shades) and crawled into bed. He tossed a bit to get comfortable and his leg brushed up against a wet spot in the sheets. Since we were still newlyweds, this was not all THAT unusual. *wink wink*

Then he felt something move and brush up against his leg. That's when he whipped the covers off and flipped on the light.

I heard his deep-throated scream from the other end of the house (not all that shocking, since this house was the size of a postage stamp). "What!! What's wrong?!"

You guessed it. One of the cats had deposited their latest "toy" in our bed. I suspect it was Sasha and he was still playing with the snake when John interrupted the cruel reptilian torment. The snake had been abandoned; alive, punctured, and bleeding under the covers.

I am still happy I decided against napping that day. ;-)

Years later, in a different house, we discovered a carpenter ant infestation. In the course of conversation with the nice exterminator, we mentioned the "snake incident". He was amused. "Yup. Where you find mice, eventually you will find snakes. Snakes love mice." Good to know.

Now I know why the mice were leaving the basement. They were running from the snakes. LOL 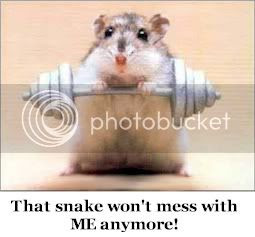