A couple of amusing things from today...

I was in a chat with some of my weight loss buddies and one mentioned she was tempted to dig in to her daughter's wedding cake top that was in the freezer. Those cake cravings can be a killer. It reminded me of another wedding cake top...mine! 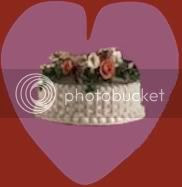 I had read an article in a bridal magazine about how to properly wrap and preserve your cake top for freezing (to follow the tradition of eating it on your first anniversary). I discussed it with the lovely woman who made our cake and she reminded me that the top of our cake was going to be covered with fresh flowers (which do NOT freeze...they rot). At the end of our reception she surprised us with a specially prepared "cake top" that was an exact replica of the real cake...only the flowers were done in frosting. I was so excited! She even took the time to wrap it per the instructions in the article.

I gave the precious cargo to my Mother-In-Law with instructions to place it in her freezer when she got home (since we were leaving from the hotel the next day to go on our honeymoon).

Through a miscommunication, the kitchen staff at the hotel "saved" the real top of our cake, wrapped it up, and gave it to my Mother-In-Law for safe keeping as well. She let us know that she had THAT top as well. Great! We would have leftover cake to eat when we got home from our trip AND one to save for next year. Perfect!

When we got back, my MIL gave me the frozen "keeper" cake top and apologized for eating up the rest of the other cake top. She served it to family who stopped over to the house the day after the wedding and then polished off the rest herself as the week went by. Oh well. No more yummy cake for us until our anniversary.

On our first anniversary, I made a romantic dinner, dressed in a sexy red silk teddy, and we ate and celebrated. Per instructions in the article, I had taken the cake top out of the freezer and let it thaw in the fridge for 3 days prior to our lovely dinner. I was so excited to sample that wonderful cake again. I unwrapped the foil and a foul odor smacked me in the face. There it was...a mound of rotted, stinking flowers on top of a mashed, poorly wrapped, freezer burned cake top. I cried. We called my MIL the next day and told her what had happened. She ATE THE WRONG CAKE TOP!

I couldn't resist asking...didn't she notice the lack of fresh flowers? How carefully it was preserved in multiple layers and types of wraps? She could only stammer an apology and say, "Well...it was really good cake."

And in the "Out of the mouths of babes..." department: My son had us in stitches tonight. He was playing on the floor at our feet while we watched the intro to 48 Hours. The announcer somberly spoke about tonight's expose of "The Canal Street Brothel", a whore house run by 3 generations of the same family. Grandma worked the phones, Mom was the Madam and pretty Grand-daughter was featured on the "menu". They showed hints of scenes of sex and debauchery on canal street and finally the voice-over said "The Canal Street Brothel, tonight on 48 Hours."

Tyler suddenly looks up and says "I wanna go there! On bay-cation!" It was so out of the blue we burst out laughing! When my husband had composed himself, he asked "Where Tyler...Canal Street or the Brothel?" Tyler says, "Brofel." Oh my. He is starting WAY too young. We promptly switched to a Bob the Builder DVD.
Email Post

Congratulations on your new baby blog. It's soo pretty!

Hope you are happy here and I wish you all the best. Stop by my journal sometime as I've written an entry about all this and it'd be nice if you left a link so that your friends could still visit. (just in case they haven't got it already)