A friend posted a series of photos to Facebook this morning of the fog banking around her home. I've always loved the fog. When I was a kid, I spent a lot of time imagining what heaven would be like. In the movies, it was always puffy white clouds underfoot and people with little wings springing from cotton ball puff to cotton ball puff. Walking on clouds! How cool would that be?!

Then I took my first plane ride and realized that clouds were far from solid. We went up, the sky went away, and it was like being in dense fog. Sure, once you were ABOVE the clouds, you got that big screen heaven look. That trip through though...that was a thing. From that point on, every time fog rolled in, I would do a little dance. I was IN a cloud. INSIDE one! I wanted to shake people. Did they see it? Did they realize??

I took a lot of science classes over the years and learning the nitty gritty about cloud formation and how it was just water vapor...that took some of the magic out of it for me, but not all of it. 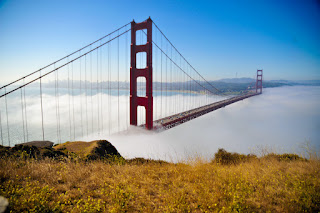 Seeing those photos made me remember a long ago trip we took to San Francisco. It was the beginning of July, but the city was completely fog-bound and chilly. We walked up the pedestrian walkway of the Golden Gate bridge on July 4th along with a ton of other folks and slowly rose up out of the clouds with the height of the bridge. Up there, the sun was shining (but setting) and the glow reflecting off the city skyline, shrouded in mist, was so stunning it made me cry.

Then the fireworks started.

That was pure magic! The low altitude bursts were IN the fog and it lit them up with this unearthly glow. I leaned against the rail and snuggled close to my guy just entranced with the show. Fog is amazing.
Email Post