I haven't done a stroll down memory lane post in a long while. The brain tends to focus on getting through the day and time to just let thoughts drift isn't available. I did have a funny memory come to mind the other day when I was talking with Max about growing up in the 1970s.

In the early 70's, my family relocated, once again, to Massachusetts and eventually we bought a house in Bedford. It was a quaint little town with many old colonial influences and a crap ton of history. We were in a newer neighborhood (at that time) on the outskirts of town. All houses, no businesses. It was 10 minutes, by car, to the nearest strip mall, and our new town had a few of those.

In my many attempts to impress on my spendthrift son the joys of saving money, I mentioned that my brother and I also received a weekly allowance, but 25 or 50 cents a week didn't really go far in most places. There was the Ye Olde Bedford Country Store just off the main drag that had a great assortment of penny candy (I think it's a chiropractor's office now, sadly) but if you could reign in the urge to spend for a couple weeks, the place to go was Bowen's Toy Store.

This particular strip mall I am remembering had a number of different businesses, but the ones I remember best were Bowen's and RuthAnn's (a drug store). Years later my favorite Italian restaurant also opened in that mall, right across from where Bowen's used to be. I miss their chocolate mousse cake.

Back to Bowen's. You had to have at least a dollar to get anything good in that store, unless you were happy with the junk in the gumball machines. I did luck out with some pretty cool rings with big fake gemstones. I think that is also where I got my mood ring, but that machine was one of the 50 or 75 cent ones. Every now and then, when the stars aligned, my brother and I would have enough money to get something REALLY good. A personal favorite was: 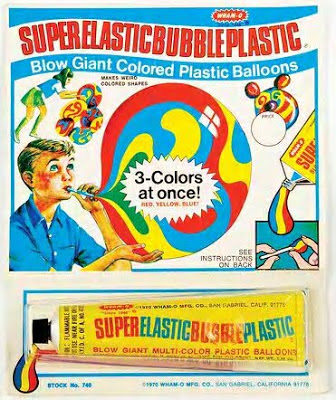 SuperElasticBubblePlastic! Yeah. You had to say it all in one breath as one word. Ha! I loved this stuff. You'd squeeze out a small wad, stick it at the end of this short and sturdy straw and blow into the other end. They were like bubbles that lasted for the whole day. Not quite as sturdy as a balloon, but they didn't pop as easily as a soap bubble. Somewhere in between. Like a super light-weight beach ball.

Plus that plastic gunk smelled like a cross between gasoline, model glue and magic markers. I'll bet sniffing it was really bad for you, but it was hard to resist.

A tube of this could keep me entertained all day long. I had fun explaining this stuff to Max. Naturally, he wanted some. Explaining why they don't make it anymore was difficult. The wiki said something about noxious fumes. I can believe it.

Then there was that one Sunday, after church, when my Mom needed something at the drug store, so, naturally, my brother and I begged and pleaded to be allowed to visit Bowen's again. My Dad must have been in a particularly good mood on this particular Sunday, because not only did he allow us to browse the store while my Mom was doing her errand, he also allowed us to buy some of THIS: 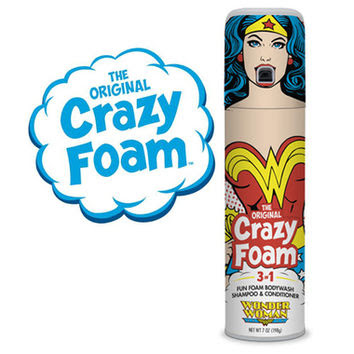 Now Crazy Foam is really glorified shaving cream. It was meant to be used in the bathtub or shower as a funky and fun way to lather up. Much more fun that your standard bar of ivory soap! (This was before the days of shower gel.)

But how do you play with this stuff on a hot summer day when your parents have no interest in running you a bath?

Once we got home, Dad said (and I quote) "It's just soap. Go ahead and play with it in the backseat of the car. It could probably do with a good washing."

Yeah. I don't think Dad had any clue what 2 kids and 2 brand new cans of Crazy Foam could do. 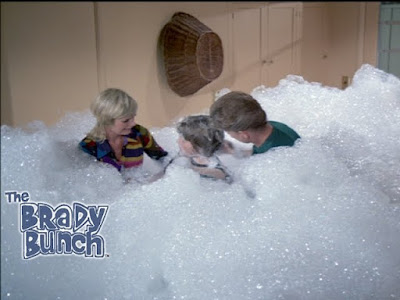 Remember that episode of The Brady Bunch when Bobby put too much laundry soap into the machine? Yep. It was just like that in the backseat of the car. Now, my Dad had a temper. My brother and I had a total blast covering each other and the seat in soapy foam. It...was...awesome! It was also navy blue vinyl seats on a hot day in August, so after a while, we were done playing. Then we looked at the aftermath and were trying to come up with a way to diffuse the atom bomb (aka Dad) when the garage door went up. *gulp*

My brother and I were both talking at once. My Dad turned a bit red for a moment and said "just go get the hose." After that, it was back to squeals of fun as Dad turned the ice cold hose on us both and rinsed out the back seat too. He didn't say a word about the mess and I don't think he told our mother either. We were running around the car, squealing and getting sprayed. So much fun. I am still amazed that my Dad kept his cool. He never kept his cool. Never. Which is why, I think, the memory is such a strong one for me.

Maybe he realized that the whole mess was his idea in the first place. He was the one who told us to go ahead and play in the car. Rational explanation, eh? But Dad was not known for being super rational when he was mad.

Maybe he saw the humor in it. Both his kids covered in soapy foam from head to toe and the car full of foam up to our waists. It must have looked hilarious! I'll never know. I think I'm the only one who remembers this incident. It was a good day.