I am Princess Jellyfish

I'm sure I've blogged about this before...my deep affection for Japanese animation (anime). I adored Speed Racer and Star Blazers as a kid and the love never faded. I still love to watch good anime to this day. Lately, I've been looking for something. I had such a strong connection to certain shows when I was younger, but I don't have a crush on Speed Racer anymore.

Over the years various friends have raved about certain movies and series, so I would watch and typically I would agree. They were good. But I was still looking for something. I wasn't sure what.

I found it tonight!

The kids were in bed and I was done binge-watching True Blood, so, what do I watch now? I watched a few more episodes of Heaven's Lost Property. Meh. It's good. Weird (which I like) and somewhat funny. But...not IT. Black Butler...also good. Super weird and twisted. Also not IT. Then I found Princess Jellyfish. 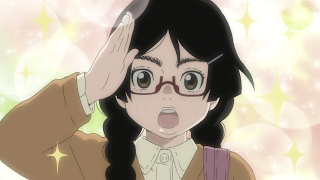 This is IT! Tsukimi is my long lost twin. Awkward, paralyzed in social situations, intimidated by super beautiful people...she is otaku. Just like me. Geeky, nerdy, yadda yadda. Finally, a character who speaks to the me I was at age 16 or so.

She made me realize something critical. Thank goodness the internet, as it exists today, did NOT exist back when I was a teen. I would have found my own tribe of like-minded girls online to hang with and I'd probably never have met a nice guy or gotten married. Not that my life would have been BAD if that were the case, but I am rather fond of my life now.

If you are a shy otaku girl reading this right now, I encourage you to take a risk now and then. Put yourself out there. I know it's scary! But things worked out pretty well for me. And I am still Princess Jellyfish on the inside. :)
Email Post
Labels: anime Japanophile otaku girl Princess Jellyfish

Heather said…
Hi Becky! My name is Heather and I was just wondering if you would be willing to answer my quick question I have about your blog! If you could email me at Lifesabanquet1(at)gmail(dot)com that would be great :-)
1:27 PM