After two days of the howling mad fury that was hurricane Sandy and a night without power, the husband suggested we get the heck out of Dodge. You see, last year the freak blizzard around Halloween knocked our power out for a week. Now here we are looking at 7 to 10 days without power.  Why sit around and try to ride it out again? We already knew the contents of the refrigerator and freezer were a lost cause. I looked at the tense faces of our boys, considered my own incredibly stressed out state and the first hotel that came to mind was Great Wolf Lodge. Why not turn fleeing from the devastation into something fun and memorable for the boys?

John called the PA lodge to see if they had power and next thing we knew it was time to pack! John knew if we waited for a day or two (as most folks are inclined to do) the hotel would probably fill up with refugees from the storm and we'd most likely be stuck. Best to abandon ship before the deck vanishes beneath the waves!

I do feel guilty seeing the faces of folks on TV stranded by the storm with flooding and other damage, but I am super grateful for power, comfort and a cozy fireplace.

It took us three tries to get out of our own neighborhood. We had to keep turning around and trying other side streets to get to the main road through town. There were trees and power lines down everywhere we looked. The big billboard with the cute kid dropping an expensive cell phone into a toilet (an ad for insurance that we have pondered over and over) was blown down. Road signs ripped in half, a telephone pole leaning precariously over the road just waiting for the next strong wind gust to knock it over completely, homes with missing shingles and siding (like our own home) and even one home with a massive hole in the roof were just some of the signs of hurricane damage we saw as we left. 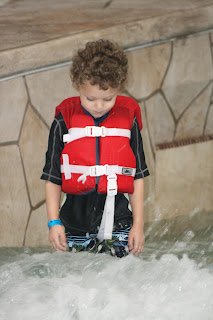 As I watch the boys leaping over the artificial waves in the wave pool here, I keep picturing images of Sandy hammering the coast of New Jersey and all our old favorite shore hangouts being washed away. I shake my head and smile reassuringly at the boys trying to embrace a sense of normalcy. I know I will look for ways to help friends and neighbors recover from the storm when we are able to return home safely.

Meanwhile I am praying for other storm victims. Huge thanks to all the workers and volunteers flooding in along with FEMA to help New York and New Jersey rebuild and repair after Sandy had her way with us. Stay warm and dry folks!
Email Post
Labels: hurricane Sandy

Donna. W said…
You found a way to make lemonade from the lemon life handed you. Good thinking!
6:06 AM

Willene Fagen said…
Hurricane Sandy definitely left some pretty bad damage to homes and properties. Big trees toppled down on houses, torn-off roofs and floods were common signs of devastation. It was tough for the citizens, but I think more people are trying to move forward from what happened. And I think these boys are doing the same thing.
12:21 PM

Willie Norman said…
Yes, Sandy definitely wreaked havoc on homes and properties, and the after-effects were not a pretty sight. But as they say, there is always a rainbow after the storm. And moving on despite the tragedy is the only way to go.
12:10 PM

Danielle Bailey said…
Prayer and Faith alone can make us safe out of tragedy, and such weather conditions. We know that Hurricane Sandy has affected many people lives. It destroyed many house, roofs were torn-off, uprooted trees, and destroyed infrastructural buildings. It made a mark on our heart and mind. All we can do now is rebuild everything that has lost for we must be thankful for we are still living in this lovely world.
2:47 PM