I finally had the chance to watch The Devil Wears Prada last night. Good movie. Early in the film there is a scene where Andy (played very well by Anne Hathaway) is on her way to a job interview. She stops short and stares in awe up at the imposing view of the sky scraper she's about to enter and the look on her face made me well up with tears.

Crying? After watching the movie for only 10 minutes? What's up with that??? I didn't have time to think what about that scene hit a nerve in me until after the film was over. There was an extended version of that scene, as luck would have it, in the DVD extras.

I finally realized what it was. It's the same reason I cry at the scene in the movie Working Girl (with Melanie Griffith) where she finally realizes the nice office with the big window view is HERS and she calls her friend to say "Guess where I am?" Both films bring back the emotional memories I have associated with my own working days and the moments when I finally realized; "I have really made it. I'm a success."

There was the time I was promoted out of the dead-end world of unionized clerical workers and into my first managerial position (with my own office.) On my first day in that job I really wanted to call my best friend and recite the line from the movie we'd both seen together all those years earlier. But she had died before ever getting the chance to see me turn my life around.

That first promotion was amazing, but I had at least two more instances where that feeling of having "arrived" happened again. Another time was in my second assignment since hitting the managerial ranks. That next job required more technical skill and a lot of travel. When I was sent on a trip to Boston to work in one of the sky scraper office towers down-town, I had my wow moment. I exited the taxi I'd taken over from my hotel and just stood on the sidewalk looking up with my jaw on my chest. You'd think I'd never been in a city before! But no...it was just my first time WORKING in a fancy office tower like that. The emotions were overwhelming.

The last time was in my last job before I retired to be a full time Mommy. That last job was a huge promotion that put me square in the middle of middle-management. Getting that job title and pay grade was very gratifying. Seeing my name and title on the newly published organizational chart...one little branch down from our organization's Vice President...what a feeling! My VP knew we were trying to adopt, but she (and I) never expected that Tyler's birth-mother would appear and select us so rapidly. The paint was barely dry on my office walls (there's another moment - being important enough to rate a fresh coat of rose colored paint on my walls and new carpet too) when I had to put in my notice for maternity leave.

I miss working. Those milestones were such an obvious marker of success. Raising children is a little different. Your measures of success aren't quite so cut and dried.

But I wouldn't trade my current job title for any cushy executive job on the planet. Well... unless it came with a HUGE pay raise and enough free time to spend with my boys! LOL! 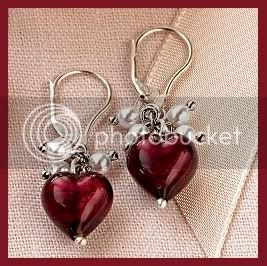 Totally off topic: I had to rave about my new earrings. I had a gift certificate from Christmas time and finally found something I had to have.

Aren't they pretty? They look even nicer in person. It's been a long time since I bought any jewelry. It was totally worth it just to get the box they came in. The box is red, hinged, and closes with a ribbon tie. It was so elegant that I made a squeeeee noise when I saw the little box inside the blah big brown shipping box.

hestiahomeschool said…
I think my big moment was standing in court testifying, and realizing that all these people were listening to me and taking me seriously.
9:19 PM

BosieLadie said…
Awww! What a great entry! I watched "The Devil Wears Prada" last night too! I thought it was a great movie and yes, it had many moments for reflections of my own successes in the work world. "Working Girl" is another one of my favorite movies. Love those earrings! I just repierced my ears in September after being unpierced for nearly 30 years. I had to let them close up when I was in my early 20's.
2:36 PM

BosieLadie said…
Awww! What a great entry! I watched "The Devil Wears Prada" last night too! I thought it was a great movie and yes, it had many moments for reflections of my own successes in the work world. "Working Girl" is another one of my favorite movies. Love those earrings! I just repierced my ears in September after being unpierced for nearly 30 years. I had to let them close up when I was in my early 20's.
2:38 PM

BosieLadie said…
Awww! What a great entry! I watched "The Devil Wears Prada" last night too! I thought it was a great movie and yes, it had many moments for reflections of my own successes in the work world. "Working Girl" is another one of my favorite movies. Love those earrings! I just repierced my ears in September after being unpierced for nearly 30 years. I had to let them close up when I was in my early 20's.
2:40 PM

jennifer said…
Ah. You made me think.

My moment: I had a class of 225. I was lecturing and out of the blue I stopped talking. I heard nothing. Absolutely nothing. I would have heard a pin. I realized I had them in the palm of my hand. And at that moment, I knew. I just knew.

It still gives me chills.

Magogo's Musings, too said…
I don't think I ever had such momet, which is sad, but I can imagine what it must feel like, and I am so glad that you were able to have it-times three! And I certainly understand that while raising children is an incredible experience, it lacks some of the excitement of rising in a career. The excitements are smaller, but more worthwile in the long run(sometimes it seems like the very long run, though, doesn't it?) And I know you wouldn't trade your boys for anything.

The earrngs are beautiful. I am glad you have the plleasure of them. Margo
10:19 PM

Anonymous said…
I don't know why but I've never felt secure enough to have that feeling of arrival. I've worked in big pretty buildings. I've had my own office. I've even signed V.P. after my name in the past, but I've never had a sense of arrival. Hmmm...something for me to ponder.

I love the earrings! They hearts look like pomegranite seeds.

Anonymous said…
Ok totally off topic but I found this website and the little boy looks so much like Tyler I had to send it to you www.darksidetattoo.com scroll to the bottom and you'll see him
2:28 AM

I'm starting to feel "grown-up" with MaMaMade now. Especially with all the work we're putting into it, it seems like we're finally getting some reward!

Life as a mom is definately different than the office workforce. I haven't worked in an office since I before Sarah was born, I can't even imagine it now. Although I do think fondly of long lunch hours by myself. With drinks. And other grownups.
1:49 AM

Anonymous said…
I've had that feeling of arrival but, not so much in the business world as you mean. Mine came with my business. :-) Those are pretty earrings.

Chris said…
Glad to see that I'm not the only one that can come to tears at odd points in a movie:)