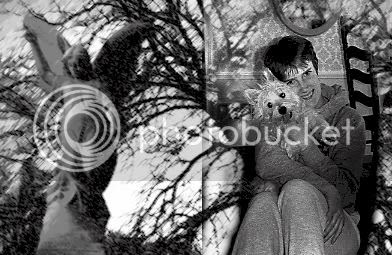 Never thought I would begin my first online journal with such a somber subject. But my mind comes here sometimes. A scent...something I hear or read...eating a particular food... Tonight it was a movie. I watched and the tears came and haven't stopped. My inner voice is talking to me as I sit here and type. "She was only a friend. It's been..." I have to stop and count the years on my fingers -14 years? Can that be right? "You should have moved past this by now? What's wrong with you? Why can't you just live your life and be happy? Why do you wallow in depression, guilt...you're pathetic. Up in the middle of the night feeling sorry for yourself...that's all this is." My inner voice isn't very sympathetic.

She was the best friend I have ever had. Closer to me than a sister would be. Closer than anyone before...maybe even closer than my loving husband is to me. I call HIM my best friend...now. I read somewhere that the best friends you will ever have in life are made in school. Elementary, high school, college... once your life begins for real - the opportunities to make new friends are just no longer there. Or so I read. I believed that for a long time. My best-friend-making days are long over. I do have a couple new friends. I make new ones now and then. But the friendships have yet to last. Things in their life change and suddenly being my friend is no longer a priority. I am not that important. "There you go sounding all pathetic and whiney again."

Yeah - well I really need a new best friend. One just like SHE was. I could tell her anything. We did everything together, went everywhere, talked on the phone when being together in person wasn't possible. We raised a few eyebrows. Even our own mothers were suspicious of how close we were. They were jealous. They had to make our friendship into a perverted sex thing. My mom thought it was HER. She had the unnatural attachment to me. Her mom thought it was ME. Corrupting her sweet/pure daughter and turning her against her own family. She was being smothered in that house. If only they taught her how to rely on HERSELF and not everyone around her. But I can't start blaming them. Or her. Or me? Me. How could I have done things differently? "Oh sure...just a nice way of saying WHAT IF. There is no WHAT IF. Only WHAT IS and WHAT WAS."

She was only 22. Neverhad a real boyfriend. I set her up on her one and only date. I found him in an online singles BBS. AOL didn't exist yet. She fell for him instantly. He ended up falling for ME! So twisted. And just more fuel for her endless depressive self-defeatest attitude. So fragile. She could be so strong, brave and independent one minute. And then again, so clingy, helpless, afraid and hopeless. No self-confidence. She was tall, well proportioned...not fat, but sturdy. Thick chestnut red/brown hair, ocean blue eyes, freckles - porcelain complexion. Peaches and cream. She swore by Ivory soap. That made me smile. I had forgotten that. I have forgotten so much.

Memories that come to mind: her riding on the roof rack of my crappy blue hatchback after we had a fight. She wouldn't get in the car until I forgave her. She was trying to make me laugh. It worked. She didn't think I would drive away with her up there. It's a miracle I didn't get pulled over and arrested. Her meeting my first real boyfriend...and hating him instantly. She was a good judge of character. He was a psychopath. But a sweet and sensitive psychopath. Why was I the only one who could see that in him? Ha. Her getting SO angry with me because I went to see the movie Beaches with another friend before I went with her. It was advertised as the "movie you see with your best friend". So she naturally assumed...I was such a bitch that weekend. Her turning down an offer from her Aunt to pay for her dorm room and board at college. She wouldn't take charity from family. She would live at home and commute. She should have gotten the hell OUT of that house! She needed her own life...to grow up and become independent, self-sufficient, strong enough to survive.

A week before her birthday...the call at work. She wanted to have lunch with me. Needed to talk. Having a hard time with her school and making enough money for her tuition. I was working in a great job in the worst work environment in history...back-stabbing, gossip, sexual harassment...I was so stressed and distracted. No time for her. No time to listen to her whine AGAIN about the damn tuition. About how her family couldn't afford the money. About not having met HIM yet. She wanted a boyfriend so badly. I couldn't do it. I snapped at her. Too busy! No. Don't come here. No. I can't go there. No! I will see you later...LATER! Good bye!

The phone call. Her mother asked for my boss. Asked him to bring me into his office. In private...he hands me the phone. my friend is dead. What kind of woman thinks of my privacy at a time like that? On a day like that? So calm. I was not. Couldn't think. Couldn't breath.
Her clothes laid out neatly on the bed. She is dead on the floor of her tiny pink bedroom with the shitty blue carpet. Her little brother finds her there after he comes home from school. Walked all the way home. Sister wasn't there to pick him up at the bus stop. He found her there. Alone in the house. I didn't come over for lunch. She's gone now.

A week after the funeral her mother calls me. Come over for dinner. Shows me her room. Not her room. Now her brother's room. New carpet...paint...where are her things? Gone. Spare room has her furniture...but not HER. Her things. All gone. Given away to strangers. What's left for me? Her letters? She kept EVERYTHING I ever sent her, gave her, loaned her. Gone. All gone. No pictures of her anywhere. Gone. She has been erased. Her mother hands me an envelope full of photos and negatives. None of her. Some of them are of my new apartment...so her mom thought I would want them. The rest were for her photography class. And a coupon for pizza. From her car glovebox. I could use that, couldn't I? Bye bye now. Keep in touch. Don't ever come back. She isn't there. Never will be again.

Did she leave anything for me? She was a letter writer. Wrote diaries. If she were going to kill herself, there would be a NOTE. There would be SOMETHING. Say goodbye! SAY GOODBYE! Don't leave me like that!!

Nothing left. All gone. Erased. Nothing left of her. So generous. She would give you her last dime and shirt off her back. She gave it all away. Her organs, her eyes, her skin...nothing left. So many saved. I can take solace in that, can't I? Doesn't that make me feel better? No. Her mom had to have something to bury. What was left? Her head and her hands...and an ugly dress stuffed with god-knows-what. She would be so angry. Never wore dresses or skirts. JEANS! Where are her favorite jeans? Her peach shirt that made her skin glow like she was lit from within? Given away to strangers. She never wore makeup. Who WAS that in the coffin??? I don't know that girl.

Fast forward 2 years. I am getting married. She knew him. Thank god he got to meet her and know her. She was to be my maid-of-honor. She saw my ring. She was so happy for me. So sad for her. She knew I would leave her and move to his home state. She was right. Time to throw my bouquet...I throw a different one. Left over from the cousin who let me down. The flowers I carried down the isle - my peach roses. They are for her. They were always meant for her. The peach dresses my bridesmaids wore...her color. I give my precious and beautiful bouquet to my other school chums. They knew her too. But not as well as I. No problem. They will make sure she gets her flowers. They take my bouquet for me and place it safely on her grave.

Anonymous said…
I had to cry as I was reading this. I know all too well the why's and what if's of suicide. My best friend killed himself when he was 19. It was ten years ago next month and it doesn't seem any easier. Some days I still feel like I'm suffocating. I once heard a quote during a suicide prevention fundraiser "A person who commits suicide dies once, those who loved them die a thousand deaths."
3:58 AM

Lori Lavender Luz said…
This is a heart-rendering tribute.
5:59 PM