Max just finished his annual birthday treasure hunt. I print out riddles that have him running all over the house. He figured out all the clues and found all his presents!

Last year I missed the almost nonexistent advertising for the NES Classic (a special edition gaming console from Nintendo with a sweet collection of their classic games pre-installed.) As soon as I knew it existed (well after the release date) I went on a quest to find one. I failed (unless I wanted to spend some outrageous amount from a scalper on Ebay.)

I was crushed. I mean, sure, we have 2 of the original NES consoles and most of the game cartridges they built into the new gizmo. But the new one was tiny, portable, pre-loaded and awesome! And Nintento WAY under-estimated the consumer response.

Fast forward through Christmas and into early this year and Nintendo announced they would release the SNES Classic on September 29th. I actually wrote it on my calendar.

Release day at midnight, I was haunting all the websites without any luck. ThinkGeek released a batch for sale at midnight Pacific time, but their site was HAMMERED. So...many...error messages. I didn't get through.

Activate Phase 3! I messaged the amazing husband in the wee hours and alerted him that our local Walmart was supposed to have 17 units. Could he swing by after dropping the boys at school? But then the morning didn't go well. The boys were late. Since Walmart opened at 7 and poor John was still herding cats at 9, he thought it would be hopeless.

Then, on a side quest for breakfast, he spotted a line outside GameStop and sent me a message. Why, yes! GameStop opens at 10am and they are supposed to have a sign on the door with how many units they have for sale. How many people are in line? The husband sends back "Ugh. I'm not standing in a line."

A few minutes later he sends "I'm in line."

I sat biting my nails for about a half hour when he sends "The door says they have 18 units."  How many people are ahead of you in line?!?!?!  "There are 7 people ahead of me."

Then he sends a photo of of his purchase. 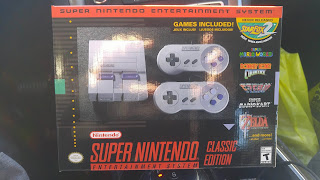 We have THE THING!  Victory is mine!  Oh, and Max was super excited once he realized what it was. LOL  Now I wish he didn't have soccer practice. I wanna play with his new toy. 🤣

I wonder if they will have a special edition of the N64...
Email Post
Labels: birthday Max NES Nintendo SNES Special Edition