I spent the past week playing single mom again. Darling husband went to Tennessee for a work thing. He missed soccer practice, the spring concert (Max played the flutophone and sang with his class), a soccer game (Max's team won and are currently undefeated!) and the Spring Carnival Dance. What's a carnival dance, you ask? Well... they combined a typical school dance (kids dressed up and dancing to music from our awesome local DJ) and carnival games. Max won a fish.

About 10 years ago, Tyler won a fish at a carnival. That precipitated a trip to PetSmart for a small desktop fish tank, chemicals (to dechlorinate the water), food, and decorations. Then came "my fish is lonely" followed by, "my fish died" followed by, "now that one needs a friend", followed by a large bag full of new fish, a larger tank, more decorations, guppies giving birth, fish cannibalism, fish segregation, an even larger tank, and so on.

This lasted a few years until the last of the fish sadly passed on and the tanks were emptied, washed and retired. Until Friday night. 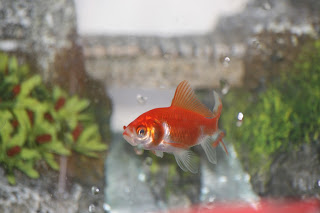 Max came home with fishy at 9:30pm, quite triumphantly, and shortly after that, the dad came home after a long day of travelling. He wasn't too happy to meet Fishy, but he also wasn't falling into bed (as he so desperately wanted to) until Fishy was happily ensconced in a sweet new home. Out came the middle sized tank and a slew of decorations. Water was dechlorinated and added to the tank, Fishy was carefully acclimated to his new environment then gently poured from his clear plastic bag into his swanky new digs. The dad fell into bed shortly after midnight. Max was THRILLED with Fishy's new setup and had a hard time settling into bed.

I prayed Fishy hadn't been through too much trauma and would survive the night. We are now on Day 3 and he is happily swimming. He's just a tad skittish. Took me ages to get that macro shot, but I was happy to have something interesting to shoot. Haven't taken out the good camera in a while and the macro lens had some cobwebs. I exaggerate only slightly. Ha!

We are a fishy family once more. "What, hun? You are headed to PetSmart?" *sigh*
Email Post

Donna. W said…
I can't keep goldfish alive at all. Tried many times when I was a teenager, but they all die, usually within the first week.