I meant to do a quick search of my blog to see if I've written on this topic before, but I opened a new entry first. So, now I must start writing. I am 50 now, so I guess I have a good excuse if I start repeating tales from my storied childhood. Ha.

In 3rd or 4th grade at Nathaniel Page Elementary, we were given the opportunity to join the band or the orchestra. That meant choosing an instrument. I'd always loved music and musical instruments, so this was HUGE. What should I play? Flute? Trumpet? Cello? Harp? French Horn? Tuba?? Violin?!?! There were so many choices! My father's first concern was cost. My mother's first concern was size. "How are you going to carry something that big to the bus stop?!" Followed by, "Are you going to practice? If we get you this instrument, you have to promise you'll practice!"  I was ready to promise my first born child if they'd only allow me this chance to learn.

After drooling over various choices at a local music store, I finally settled on the violin. I'd taken ballet. I loved (and still do) Classical music. It was a sleek and elegant choice. Plus my parents said no way in hell to an electric guitar or piano. So...there was that.

I remember being measured for my violin. I remember my mother gasping at the rental fee but being placated by the sales person that all fees went towards the total cost of the instrument. Eventually, if I kept it up, we'd own the thing. Rent-to-own is a nifty deal to a naive 9 year old.

Then we bought the recommended text book, sheet music and record album. Yep. You read that right. My violin book came with a record album. Anyone remember The Suzuki Method? It's still really popular and a great way to learn. Like most kids, my very first song was Twinkle Twinkle Little Star. My second song was something by Bach. Yeah! The dude! And it was something I actually recognized from my Dad's radio station or an old Warner Brothers cartoon. REAL classical music. Not the boring, repetitive junk the other kids were banging out down in the band room.

Suzuki was a genius. He had this theory that kids could learn music like they do their native tongue. Listen, absorb, and practice. I'd start each new lesson by listening to the new piece of music on the record and following along on the sheet music. Then I would try to play it just like I heard it on the record. The recorded version was one violin playing the exact piece I was learning in the book. Simple and elegant. (I imagine the method works even better now because of video and computers. At least I hope someone took the time to modernize it. I'll have to check on YouTube later.)

At school, my music teacher would play each part on each of the different instruments in our orchestra. I didn't think much of it at the time, but seriously. How impressive is that? He'd play the viola part on my friend's viola. He'd play the cello part on his own cello. He'd play the first and then the second violin parts on his own violin. He could play them ALL. Then we would all try and play together. For a pack of elementary school kids, I thought we sounded amazing. Like, Boston Symphony Orchestra amazing. And it was fun! 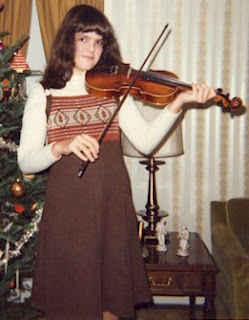 Until it wasn't. I wanted to play when *I* wanted to play. For the sheer love of the instrument. Sadly, my violin teacher told my mother I had real talent. I breezed through each unit and was way ahead of my fellow orchestra members. I was playing mostly by ear, because reading music was tedious. I had the record! All I had to do was listen and play what I heard. Couldn't everyone do that? My mother, however, decided that if they were going to keep paying for this expensive instrument, then I needed to do my part. That meant practicing every day for at least an hour. No, I couldn't go out to play with my friends. Practice first. Always. Practice first.

I played and played and eventually I started just lying on my bed and reading a book while my Suzuki Method record played for me. My mother would call up the stairs, "You are sounding really good up there, Rebecca! Keep it up! 15 more minutes and you can go outside." *sigh*

I did keep it up through Junior High. I joined their orchestra. But by then they expected you to know how to read music and there was no handy record to listen to and learn the part. I'd fake it for the first couple practice sessions until I knew what to play, then I'd join in. I also painstakingly wrote the corresponding letter for each note on my sheet music. For some reason, I could follow AABCFF much easier than just notes alone. I only looked at the notes to tell me how long to hold it. I'd lost most of my passion, however. That daily battle with my mom took its toll. When I headed off to high school, my violin was relegated to the floor of my closet and all but forgotten. I'd take it out, now and then, and play along with my Suzuki record, just to see if I still could, but I didn't really play seriously again until a couple years later when my mother got it into her head that I should compete in the Massachusetts Miss Teen pageant. I'm pretty sure I wrote about THAT topic.

I took my old violin out a few years ago, polished it up, tuned it, and squeaked out a passable rendition of Twinkle Twinkle. Max was thrilled. He loves music and instruments almost as much as I did at his age. I heard him noodling around on the electric piano today we got him for Christmas a couple years ago. Next year he will have the opportunity to join Band at his school (if they still have a music program by then.) I hope he decides to play something. It really is fun.
Email Post