Max turned 9!  It's been a pretty great year for our youngest boy. He is athletic, smart, friendly, outgoing, and a beautiful person - inside and out. He has amazing friends, plays soccer with skill and finesse, and took up tennis over the summer. He wowed his instructors at tennis camp. This fall he attended a "take your friend to class" workshop with his tennis expert best-pal, Sean, and came home full of excited stories of how impressed the tennis pro was with his ability. "This kid is a natural!" Yes, I now have dreams of raising the next Arthur Ashe circling my brain. It may become a reality, since both boys have now expressed an interest in lessons (but I'll save that for my next update.)

I'm so proud of the kind and gentle soul Max is becoming. He loves his friends and family, is not ashamed to kiss and hug his Mommy, and loves to wear shorts - even on the coldest of days. He has 6-pack abs and a burning desire for play-dates every day of the week. He loves to play catch with his Nerf football; especially with his Dad and big brother. His fondest desire waffles between a kitten of his very own and Pokemon cards. *snort* Every dime he saves is almost instantly spent on those goofy cards. He has 2 albums full and ziploc bags and tins stuffed with more.

My only source of sadness with my boy is the up and down nature of his relationship with his big brother. I relish the times they pal around together...taking walks down to the school fields and playground, biking, or playing catch. But those moments are too few. Most of the time it's the teen pushing his little brother's buttons until a fight breaks out. He takes perverse pleasure in making Max cry. *sigh*  I really pray it's a phase and the boys will one day be the best of friends, but being nearly 5 years apart in age is a tough hurdle to overcome. I should know. My little brother is 5 years younger and the gulf between us is vast. 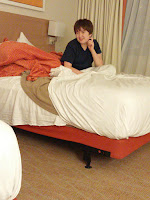 Tyler is turning 14! His birthday is just 10 days away. I am amazed at how much he has grown in the past year, both mentally and physically. He and I are now the same height and he has grown very weight-conscious. He's been working hard to slim down and has gone from a men's size medium down to a boy's size 14-16. I never would have called him "fat", but he is much happier and leaner these days. He's been asking for a set of weights to augment his daily workout routine (he does floor exercises in his room and walks or bikes nearly everywhere he wants to go) so his Dad bought him a set of 10 lb hand weights as an early birthday gift. He loves to show off his "guns" to me and I kid that soon he'll be asking me to buy him tank tops instead of regular t-shirts. He hopes to gain enough muscle in the near future so that he no longer needs to use words to intimidate, people will hesitate to give him crap purely based on his physical bad-assery. *grin*

I just wish he wouldn't use his powers of intimidation for evil. I hear from his teacher that he is actually very good with the younger special needs kids at his school. Patient and helpful. I'm pleased he is able to maintain a calm and patient demeanor at school. It's taken a lot of work and maturing to reach this point. Tyler feels ready to return to a mainstream school environment, but there is red tape we have to work through to achieve this goal. At home, however, I think Tyler takes his pent up frustration and anger out on his little brother. He teases and goads unmercifully at times and it makes my heart hurt for Max. I know home is Tyler's "safe space" where he can unload and unwind. but it's hard on us at times. I pray his level of maturity continues to grow (and his sense of humor too.)

Tyler has discovered the joy of internet trolling. There are certain groups and topics he just loves to verbally attack...feminists (sigh), the fat acceptance movement (sigh), gender equality (sigh), terrorism, and gamergate. He basks in the flame wars he incites and just can't resist poking the bear at every opportunity. The kid loves to argue. He is drawn to controversy ("Mom! Vote for Donald Trump! He's a genius! You agree, right?!" *gag*) For years I've told him he'd make a great criminal defense attorney, and that tongue-in-cheek comment seems to have taken root. He frequently talks about becoming a lawyer. We will do everything in our power to help him achieve his goals. We hope to have him mainstreamed in at least a couple of classes before the year ends in the hopes that this will ease his transition to high school next year. High school. HIGH SCHOOL. Yeah. I'm just letting the terror wash over me for the moment. *breathe* *breathe*

Back to my new-and-improved, more independent boy. He leaves the house frequently to hang with friends or walk to the store. YES! and oh shit. So far, this year, he broke 4 bones in his foot horsing around with friends and broke his little finger taking a spill off his bike. We've added an orthopedist to our laundry list of doctors now. Thankfully, Tyler now sees the wisdom in taking his calcium supplements. No more chewables, however. He can swallow pills like a BOSS. Seriously, the kid will take his ADHD med, sleep med and, like, 4 vitamin supplements and swallow them ALL at once. Sometimes without any liquid. *gag* I can barely manage one pill at a time.

Really, I am over the moon that Tyler is able to maintain his friendships. I can only guess that his buddies are exceptionally understanding and patient or they are just as surly and ornery as he is and birds of a feather...yadda yadda. *wink* Unfortunately, the head of his school's child study team has taken this new-found ability to socialize as further proof that his autism diagnosis is incorrect (in her opinion) and he needs to be re-evaluated. Followers of my blog know the struggles we've had with that school district over the years. Mrs. W made up her mind when he was in 3rd grade that Tyler was "emotionally disturbed" and all his problems were just evidence of poor parenting and the school treated him as such. It took years of testing and multiple doctors confirming each other's findings to finally get the accommodations he needed. But many in the school still treat him based on Mrs. W's opinion and NOT his IEP or doctor's recommendations. She is still on a mission to prove us and the doctors' wrong. She even made Tyler's new therapist's jaw drop at the garbage that comes out of her mouth. She drops psychiatric and medical buzz words into her conversation but, he says, she has NO IDEA what they really mean. Clueless. And terrifying that someone so clueless is in charge of all the special needs kids from pre-k to 8th grade.  Yes, I am a little angry.

Despite these hurdles, Tyler is still making remarkable progress. I just wish he could see it. He is proud of the progress he'd made, physically. But emotionally and with school, he is deeply frustrated and depressed. He doesn't have confidence in his ability to learn outside a special needs environment. He thinks he's been held back at the pace of "stupid" for too long and has fallen hopelessly behind, academically. I am hopefully that high school will be a fresh start and he can put these awkward middle-school years behind him. He just needs to TRY. I know he can do it!

I love my boys with a white hot motherly passion and want the world for them. These teen years tho...they just may kill me. I am as hands off as I can be with my older boy. He needs to make some mistakes and learn some hard lessons in the coming years. But I'll have his back, when ever he will let me. *grin*  Pray for wisdom and strength. We're all going to need it.
Email Post