Many moons ago, back in the 80's, I was a head-banger. Yes - mild mannered, suburban mom was a former rocker chick who loved heavy metal and spent every dime on albums, tapes, concert tickets, and band memorabilia. Ah, those were the days.

As you might imagine, to be a proper rocker chick, you had to dress the part. While some opted for mini-skirts and spandex, I was more inclined toward tight jeans and concert t-shirts. I had a studded wrist cuff, a chain-link belt and matching necklace, big hair (well, as big as I could fluff up this baby fine mop), and boots. The finishing touch, and my crowning glory, was my Levi denim jacket. It was well worn, butter soft, and covered in enamel pins. I had a pin or two for EVERY band I loved. The jacket was covered in them.

There were a few record stores and a couple comic book shops that carried these pins and I would spin the racks every time I stopped in. I was always in search mode. It took years, but that jacket turned into a real work of art.

When it was time to leave for college, I decided it was time to tone down my look just a tad. I didn't want to scare my new roommate (a decision I really regret now...she needed a good scare! But I wrote about that in another entry some time ago.) My best friend at the time had always admired my jacket. She was having a really hard time wrapping her head around the idea that I was moving away to school. See, she was a year younger than me, but two years behind me in school.

Kathleen was very unhappy. She was extremely attached to me and was emotionally fragile. While I hated leaving her behind and was seriously worried about her, I was also looking forward to some time apart. (She was incredibly needy and that could be exhausting at times.)

In a flash of brilliance, I asked her to baby-sit my jacket. I wasn't GIVING it to her, mind you, but I thought she would find some comfort in wearing that denim slice of my soul. She wrapped it around herself like body armor and it did go a long way in making her feel a bit better. She knew I'd never abandon that jacket so there was no chance of me forgetting about her, making new friends, and just never looking back. Nope. I'd have to come back! For the jacket. (Silly goose...she never felt worthy of my friendship and really believed this!)

This shared custody arrangement worked out pretty well, at first. She was always my first choice in side-kicks when I wanted to go to a show. Sometimes I would wear my jacket, sometimes I'd let her wear it. We always got comments on how awesome it was. Great conversation starter with cute rocker boys!

Fast forward a few years. Kathleen was now in college and I was living on my own and working full time. We still shared custody of the jacket, but it spent way more time hanging in her closet than mine. I was wearing business attire for work, so that left only weekends for me to rock out. Then the unthinkable happened. Kathleen was found dead in her bedroom one sad afternoon. I wrote about that sad day, I think, as my very first blog entry so I won't rehash it. Long story short, her death was ruled a suicide and her mother reacted very...oddly...to the loss.

Within days, she had cleaned out Kathleen's room and given away all her worldly possessions, including, my priceless jacket (among many other things.)

Fast forward another 13 years or so... One day, on a whim, I decided to buy a new Levi's denim jacket. I hadn't worn one since the loss of my first one. It was like welcoming home an old friend. The new jacket was a bit stiff, a different style, and I certainly wasn't the svelte teenager anymore, but I decided to make the best of it. After wearing it once or twice and looking at myself critically in the mirror, I realized something was missing. Besides my youth! Heh heh.

On a road trip with my husband, we stopped at a Hard Rock Cafe for lunch. While browsing souvenirs and thinking about buying a t-shirt, I noticed a spinning rack of...enamel pins! Just like the ones I used to have dozens of years before. I picked out a cool Hard Rock pin in the shape of a guitar and proudly pinned it to my new-ish jacket. I thought, "Pin #1 in my new collection!" Then the jacket got hung up in my closet and forgotten about. Life stepped in and kept us busy, distracted, stressed and occupied. 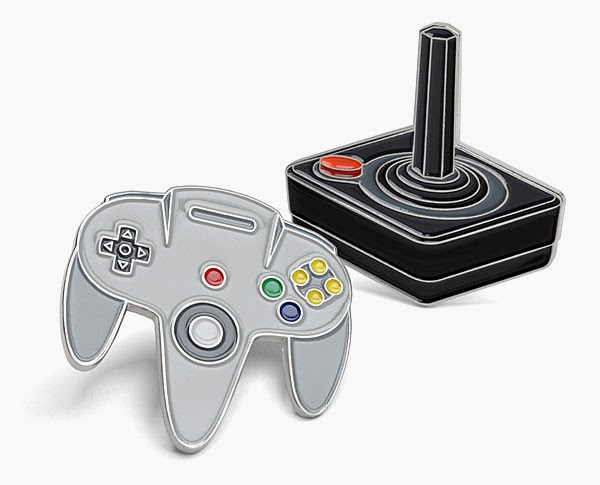 A year or so ago during a major closet clean out, I rediscovered the denim jacket yet again. It still had the lone enamel pin attached and gave me a pang of bittersweet memory. I spent a little time browsing on Ebay, looking for some of the pins I'd lost years ago but I never bought any. The jacket was rehung and out of sight and mind until about a month ago. That's when Think Geek released a new series of enamel collector's pins. First in the series was a set of vintage video game controllers. OK, so it had nothing to do with music, but hey - I am a headbanger AND a nerd. I ordered them.

Now my jacket has 3 pins. I don't know where things might go from here, but for the moment, it makes me smile.
Email Post