I met with my nutritionist at the weight loss clinic today. (Shannon is a total peach. Like her lots!) I was relating my struggles over the last month, particularly a day or two before my period hits. OMG, the cravings and hunger just get completely out-of-control. One night, at midnight, I found myself obsessing about the dozen chocolate chip muffins Tyler picked out at the supermarket (his favorite.) I finally gave in to temptation and ate a muffin in less than 5 minutes. It was so good (and I ate it so fast) that I went for another. Less than 10 minutes later, I had inhaled 2 muffins and was still craving them. I dragged myself away and just went to bed.

Some hours later I woke needing to pee and found I couldn't move. Every joint in my body was screaming in pain. Agony! I nearly wet the bed struggling to get UP. I had no idea what was going on. I felt fuzzy headed and feverish. And, oh man, the pain was unreal. All over. I barely made it and crawled back to bed thinking I was coming down with something. I had also noticed that my stomach was distended and kind of red and hot to the touch. Weird. 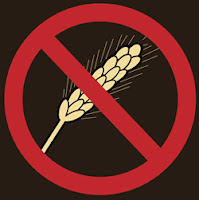 I spent the entire next day in bed, unable to move. I ate nothing and drank only water. John asked me at one point if he should call the doctor and I was seriously thinking about it. I felt B-A-D. But after about 24 hours of rest, I was feeling loads better. Days later, I was still a tad achy, but it was manageable. I found myself wondering about it. It certainly wasn't period related. I didn't have a fever. I wasn't sick, in the normal sense.

Was it...the muffins?! That was the only thing out of the ordinary. All that flour and sugar...could it be? The more I thought about it, the more I realized...that joint ache, bloated, inflamed, blah, sickly feeling was how I used to feel EVERY DAY before I cut refined sugar and flour out of my diet. It was how I always felt, so it was my "normal". I had adapted to it, sadly. But all these months later, suddenly eating 2 chocolate chip muffins in the space of 10 minutes was like, as Shannon said, taking my glucose tolerance test all over again. And I failed. Big time.

It was a light bulb moment today at the clinic. I feel so much better without wheat and sugar in my diet. SO much better.

Bad bad bad muffins. Never again! (And I am down another 3.5 lbs. Go me!)
Email Post

Donna H. said…
Wow! I had heard that from a friend with an inflammatory auto-immune disease but sometimes you just wonder how much of it is "real". I do remember feeling amazing after I detoxed myself from sugar, all bad carbs and high fats right after my surgery but over the years they creeped back in and I no longer feel as amazing as I did before. I think I can now say, I see why! I put 50 lbs back on, took 30 of them back off and now will be thrilled to lose another 20 but more importantly is how I feel and how healthy I am. Your story just got me back on the wagon! Go Becky! I am so proud of you! You are rocking this!