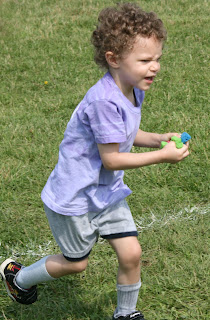 I've been lost in deep thoughts for the last couple days.  I went back and read some entries in my blog from years ago. Before I discovered FaceBook, I spent all my free time writing in here.  Many of those entries had to do with Tyler and parenting...which I guess made this a sort of Mommy blog.  I never intended it to be that way, but when you write about your life and 85% of it is raising your children, the Mommy influence is inevitable.

One of the more negative side effects to the time sucking vortex that is FaceBook is that I tend to post my thoughts in short wall updates rather than take the time to flesh things out here.  I need to see if I can capture all those status updates in some form and save them for posterity.  One thing I love about my early entries in my blog is I managed to capture a lot of Tyler's early childhood.  I think it will be fun for him to one day go back and read all my thoughts and memories from when he was a baby/toddler.  Sadly, Max won't find the same treasure trove of writing about him.  His life moments have been captured more like a series of Tweets and photos.

Max is 4.  I thought I would take a few minutes to reflect on the last few months.  This has been a fun age with Max. It's like he is made of solid joy and energy. It takes a lot to get him down. He loves music and dancing. He can spend hours replaying his favorite songs and making up dances. Luckily he has a wide range of musical tastes. Along with Laurie Berkner, the Freshbeats, Strawberry Shortcake, and other kid fare, he also loves club music (dance remixes), and classic rock. The variety goes a long way toward saving my sanity. I feel sorry for those parents who are forced to listen to Barney 24/7. Ouch.

His regular dance style most closely resembles hip hop, but he surprises me at times. I caught him copying Angelina Ballerina one day. He stopped when he saw me watching. Maybe it was my eyes tearing up at how amazing he was. He was doing basic ballet positions like he was born to it. I have this almost overwhelming urge to enroll him in dance classes, but when I ask him, he looks thoughtful for a moment then tells me no thanks. I won't give up, but I won't push. Having been pushed in my own childhood and how that sucked the joy out of all the things I loved, I just can't go down that path.  I'm still sad I gave up my own dancing and violin playing so early in life.

Max often tells me he wants to play an instrument too. It changes from day to day, but the one most consistently mentioned is drums. He also favors keyboards and wind instruments. So far, he doesn't have much interest in anything with strings, but we did have fun making a rubber band banjo one day. Today he told me he wants to start a band when he'd older. He already has his drummer and guitarist picked out (pre-school classmates). I hope Aris and Brooke are into it. Ha! He tells me he will sing and play keyboard. He really is so much fun. It pains me when he and his brother fight.

Tyler and Max are so different.  Tyler is more deeply emotional, into all things computer, and moody.  Max's chronic sunshine really seems to bother Tyler at times.  It's like vampires and sunlight. Max shines and Tyler cringes like it burns him. As a result, Tyler spends a lot of time trying to break Max down. He tries to rain on his parade, so to speak. Can a party boy and a chronic party pooper co-exist under the same roof? Time will tell. I think I am in for a very bumpy ride.

Then there are the times when they get along swimmingly. They play together - board games, video games, or just a playful wrestle on the floor. For a brief shining moment I have hopes that they will become the best of friends...then someone gets hurt. It's usually accidental, but a poke in the eye is still a poke in the eye. Tyler doesn't forgive easily and once Max is crying, he wants to stay crying.  The drama can be overwhelming. It brings me right back to my own childhood and the rather complex relationship I had with my little brother.

We had our moments. We got along really well at times. Then there were the times we didn't. Like Tyler, I was the deeply thoughtful and moody child and my brother was full of energy and constant mischief. He loved to play jokes and tease. I blame my father for the teasing part. We were also nearly 5 years apart in age. I see a lot of similarities between Tyler and myself and Max and his Uncle Mike. A very complicated sibling dynamic with personality types as different as night and day. So fun.

I will try and keep the peace without turning into a screaming harpy like my poor overtaxed Mother used to.  But enough about that. Back to Max.

I don't know if he will remember being 4 years old. I have a few memories from that age, but I think most people don't really remember back that far. He had a great year in pre-school. His teacher was Miss Mel (Melanie) and she was marvelous. Young, patient, energetic, cute as a button, petite and blond - the perfect blend for teaching kids this age. Max learned so much from her. I know he is going to miss her. You can see Max's musical tribute video to Miss Mel over on my YouTube page. That was 100% his idea. I just filmed him and added titles. OK, the blooper reel at the end was my idea. But the outtakes were just too funny not to share.

So other than mentioning that Max has expressed a desire to stay this age and size forever, I think I covered all my thoughts for now. If only I could keep him my sweet little 4 year old. I won't spoil his plans to stay as he is by telling him everyone has to grow up sometime (Tyler will do that for me at some point.)

I'll just continue to gently encourage him to keep dancing, doing his gymnastics and playing his music. Maybe he will try a class one day soon. He is only 4. No need to rush him into growing up too fast.
Email Post
Labels: age 4 childhood growing Max