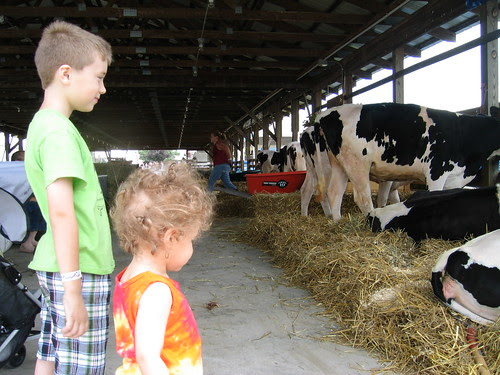 The boys visited the fair two days in a row, opening day and the day after. Opening day the weather was nice - hot but with a breeze. Day 2 was an airless oven. But that won't stop two eager young boys from having a good time. They came home covered in mud (dust settled on their sweaty bodies and turned to mud); their hair matted to their scalps with sweat and heaven knows what else. It was a relief to plop them both into the tub.

Tyler has announced that he wants a pet sheep and a pet cow. He plans to keep them both in his bedroom. He would not be dissuaded, even after explaining that cow pies often exceed the size of his head.

In other news, you may notice Tyler sporting a new buzz cut (click the photo above for more from the fair). If I'd been smart, I would have done Max too this past weekend, before the hot and sweaty dirt fest (aka the fair). Instead, Max went to bed last night with his hair still damp and uncombed. Poor kid just passed out from sheer exhaustion - after crying and flailing hysterically for 20 minutes (he didn't want to get out of the tub, or get dried off, or get his PJs on.)

Instead, I took the shears to his wooly and matted mane today. 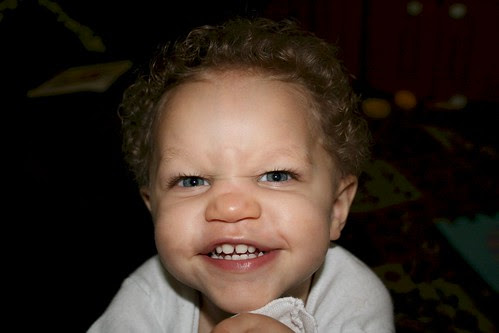 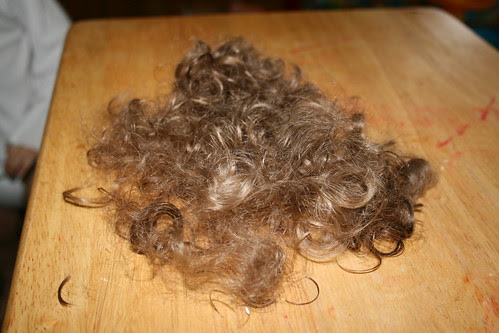 Lori Lavender Luz said…
You did a great job with that!

IndigoSunMoon said…
You did a great job! I need a haircut too! LOL
Those boys of yours...man alive, they are absolute dolls.
Love ya,
Connie
12:08 AM

freeepeace said…
Oh no!! I'm mourning the loss of all those locks.

Anonymous said…
Nice job with the haircut. You mean he held still for that? I love his new look:)
Donna
8:24 AM

Shari said…
OMGosh Becky, he is so cute!!!
Both boys are darling!
I'm lmao about falling asleep with wet hair, If I do that, it can't get a brush through it, so I know where your at :)
9:43 PM

alphawoman said…
OMG! They are so precious. Look at that pile of hair. I remember when my Mom, to save money, got a buzz kit for the boys. First she did Ned, and it came out great. Then she did Tombo, she must have gotten cocky...he ended up with a little bowl cut on the top of his head. Then right after, we had a family photo made that documents the haircut scandal.
11:14 PM